Rigi Bahnen and the weirdest ever turntable

I’ve seen a lot of railway turntables over the years, but this one at Vitznau station in Switzerland is next level – two tracks crossing at right angles, one straight and one curved, both with toothed rack rails, and wired for electric traction. Nothing normal here!

Photo by Pedroschweiz1982, via Wikimedia Commons

Located on the shores of Lake Lucerne in the Swiss canton of Lucerne, Vitznau station is the terminus of the Vitznau–Rigi line of the Rigi Bahnen, and has two tracks with an island platform. 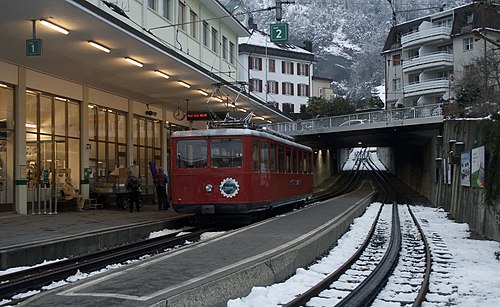 Photo by Phil Richards from London, UK, via Wikimedia Commons

Next door is the main depot for the railway. 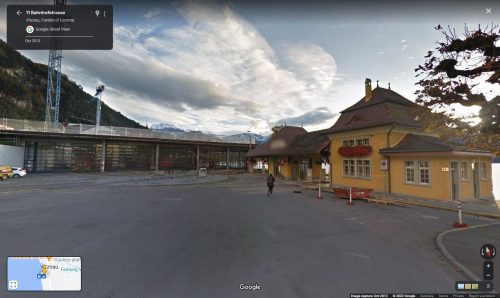 With eight roads, located at a 90 degree angle to the mainline. 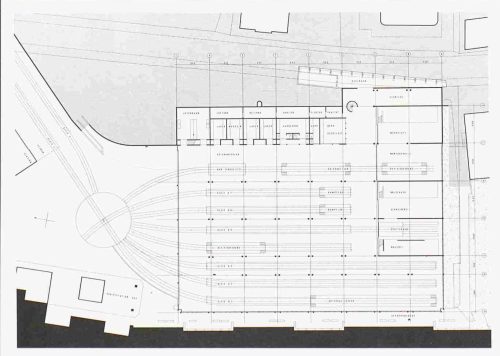 But thanks to the constrained site, there was no way to connect the two – hence a convoluted two road turntable, which serves three purposes.

To release trains from the double track terminus.

To allow complete trains to run direct into the main stabling road.

And to allow individual carriages access to the other depot roads.

Photo by Ikiwaner, via Wikimedia Commons

Shunted in one by one.

And that’s not all!

The current depot was completed in 1988, replacing a previous depot on the same site when the Vitznau–Rigi line was rebuilt for modern trains. And in 2022 the railway was again refreshed, when the first of six new Stadler Bhe 4/6 EMUs entered service. These new trains are made up of two carriages connected by a Jakobs bogie.

Photo by Heitersberg, via Wikimedia Commons

But the extra length presented one problem – they wouldn’t fit onto the existing turntable at Vitznau! The solution – a third track was added to the turntable.

Running at a 45° angle and on a different angle to the two existing tracks, the new track allows the longer Bhe 4/6 trains to run directly into a depot road that was previously only accessible via a shunt move on the turntable.

This entry was posted in Trains and tagged rack railways, Switzerland, turntables. Bookmark the permalink.

3 Responses to Rigi Bahnen and the weirdest ever turntable