Complicated crossing for train and trolleybus in Zurich

I’ve previously written about how tram and trolleybus wires cross over, and in my home of Melbourne, Australia railway and tram wires cross at multiple locations. But this massive steel bridge above a level crossing takes the cake for mechanical and electrical complexity. So why is it needed? 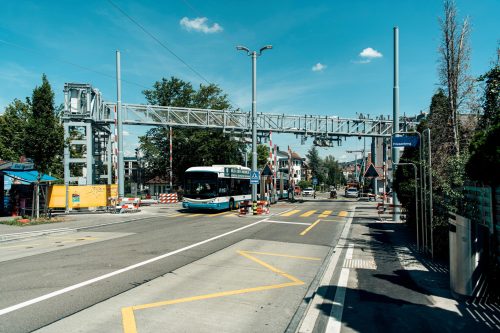 The railway is the Uetlibergbahn in the Swiss city of Zürich, running from the central station to the summit of the Uetliberg. The standard gauge railway was opened in 1875 and electrified in 1923, the line has a maximum gradient of 7.9% and is the steepest standard gauge adhesion railway in Europe.

The route has many level crossings, including one at Friesenbergstrasse.

Which since 1952 has also been crossed by trolleybuses on route 32.

So why is such a massive steel bridge now needed to carry the overhead wires over the trolleybus crossing? 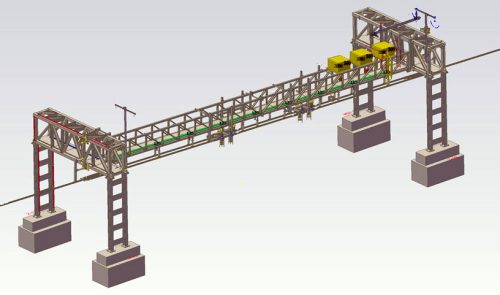 The answer lies in the voltages used.

The Uetlibergbahn was electrified using overhead lines at 1200 V DC, which is higher than the 600 V DC used on the trolleybus system. These two voltages can coexist using a neutral zone at the crossing, or by switching the voltage supplied to an isolated section of overhead.

But the Uetliberg line also shares tracks with the Sihltalbahn, which is electrified at the mainline standard of 15 kV 16.7 Hz AC. Since 2013 dual system Be 510 EMUs built by Stadler Rail have run between the two lines, using dual pantographs – side mounted for 1200 V DC, and centre for 15 kV AC.

However this was seen as an interim step, with a 2015 study recommending that the Uetliberg line should be converted to the same 15 kV AC standard, with a phased conversion by 2023. Major works were required between April and July 2022.

350 new mast foundations, approximately 1150 cubic meters of concrete, approximately 2000 linear meters of micropiles, 385 tons of steel and 37.5 kilometers of wire – these impressive masses of material are required for the conversion of the power supply of the S10.

So far, the trains have operated with direct current – in 2022 the long-planned conversion from direct to alternating current will take place. The project requires well-organized logistics. Because the measures should be implemented by late summer 2022.

“Viewed from the outside, the duration of the construction work seems very long. There are “only” a few new concrete foundations and catenary masts to be laid, as well as a few meters of power lines. However, if you consider the enormous amounts of materials, the duration of the work is put into perspective,” says project manager Florian Heizmann.

But the sticking point was the Friesenberg level crossing – 15 kV AC and 600 V DC are not compatible, so a complicated switching arrangement was designed.

Marco Graf, spokesman for SZU AG, told ZüriToday: “In August 2019, we submitted the project for converting the power supply on line S10 to the Federal Office of Transport (BAV) for examination and approval. The edition was published in autumn 2019 and everyone was able to view all the documents from the city of Zurich and raise an objection within the specified period.”

The steel construction at the Friesenberg crossing had been largely determined at the time of the approval phase and the geometry and materials were part of the building application, according to Graf.

But local residents were not happy with the massive steel structure.

Photo by Paebi, via Wikimedia Commons

Complaining about how big it is.

“We were completely surprised by the construction and are appalled. Nobody knew that the construct would be so big. We don’t think it’s necessary,” says Désiréé Sterchi, a resident next to the Friesenberg stop.

Sterchi and some of the residents think they knew about the project too late – they were negatively surprised in particular by the size of the scaffolding.

“We didn’t know that the construct would take on this scale,” says the woman from Zurich. And why is it so big? “The scaffolding is so large because it has to meet high structural requirements and is already geared towards the planned double-track expansion around summer 2024,” says Graf.

And suggesting that battery electric buses could be used instead.

The bus can run on batteries, as it is doing now during the conversion phase, says Sterchi.

But that was not seen as a solution.

Marco Graf, spokesman for SZU AG, explains that battery-powered buses are not an option because they would break the timetable. “The drive currently is not a permanent solution because it takes too much time.”

The reason for the complicated structure?

Photo by Paebi, via Wikimedia Commons

To allow trolleybuses to pass through without dropping their trolley poles.

Thanks to the new crossing system, the buses of the VBZ and line 10 of the SZU should be able to cross more easily. It is planned that the buses will not have to fold in their pantographs to pass the level crossing, as has been the case up to now. Instead, a crossing system is installed on the steel construction, which enables a seamless transition and yet prevents the bus and train overhead lines from colliding.

But teething troubles have seen it not live up to expectations.

The Friesenberg crossing system is used to separate the contact lines from trains and buses with different voltages. The routing of the catenary in the crossing area is still insufficiently calibrated and the pantograph of the trains sometimes loses contact with the catenary for a short time at higher speeds. This meant that individual sub-functions had to be temporarily switched off. While the technical defects are being corrected, the trains at the crossing have to lower the pantographs and slow down.

But thankfully, a fix was soon put in place.

The SZU spokesman promises optimisations by the end of this week: “According to the information from our supplier, the crossing should then be fully functional.”

The final DC trains ran on the Uetlibergbahn in July 2022, with AC operation in place since August 22.