Switcharoo on the Stockholm light rail

I’ve looked at many examples around Europe at trams tracks that switch from left-hand to right-hand running, and I’ve found yet another – on the Nockebybanan light rail line in the Swedish capital of Stockholm.

Photo by kaffeeeinstein from Berlin, Germany, via Wikimedia Commons

The Nockebybanan is a 5.6 kilometre long line between Nockeby and Alvik in in the western suburbs of Stockholm, connecting with the Stockholm metro and Tvärbanan tram at Alvik metro station.

Wikipedia has the full history of the line.

The first part of the current line to Alléparken was opened in 1914, following the construction of a pontoon bridge across Tranebergssund. The line was then gradually extended westwards, reaching the current terminus at Nockeby in 1929. To the east, the line ran to Tegelbacken in central Stockholm.

Planning for a Metro system commenced in the 1930s, with conversion of the tram route completed in 1952, forming the western section of the present-day Green Line of the Stockholm Metro. As a result the Nockebybanan was cut off from running into the city and became a feeder route for the Metro at Alvik.

Nockebybanan and Lidingöbanan were the only tram lines in the Stockholm region not to be withdrawn in conjunction with the switch to right-hand traffic in 1967. Since the line does not run on the street, and was simple and self-contained, and bi-directional rolling stock was available from the pre-metro tram lines, it was easier to convert to right-hand running than the rest of the network.

The make the connection between tram and metro at Alvik convenient, a cross platform transfer was provided. 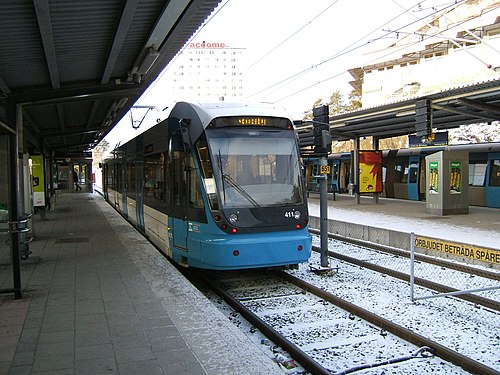 Photo by LHOON from Mechelen, Belgium, via Wikimedia Commons

Alvik station having two island platforms – trams terminating on the centre tracks, flanked by metro trains on the outside. 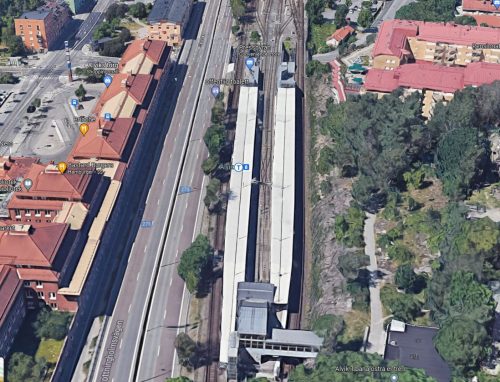 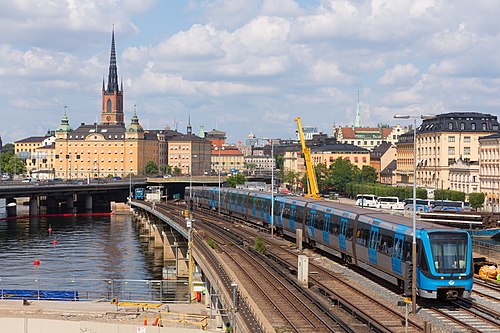 This swap being achieved at the Alléparken tram stop, the penultimate stop before the cross platform interchange at Alvik. 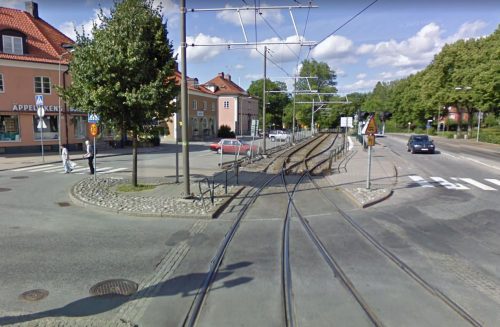 This video by Leif Spångberg showing the crossover in operation.