Enlarging the tunnels of the City and South London Railway

The narrow ‘tube’ tunnels of the London Underground are known for being claustrophobic, but there was one part of the network was being even more constrained – the City and South London Railway. This is the story of how the tunnels were enlarged. 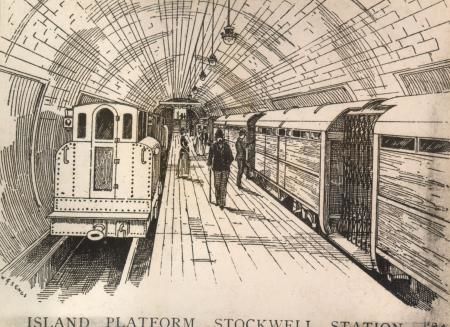 The City and South London Railway (C&SLR) was the first deep-level underground “tube” railway in the world, and was the first to use electric traction to haul trains, when it opened to the public in 1890, serving six stations along 5.1 kilometres of track. It was then extended south Clapham Common in 1900 and to Angel in the north in 1901, and north again to Euston in 1907. 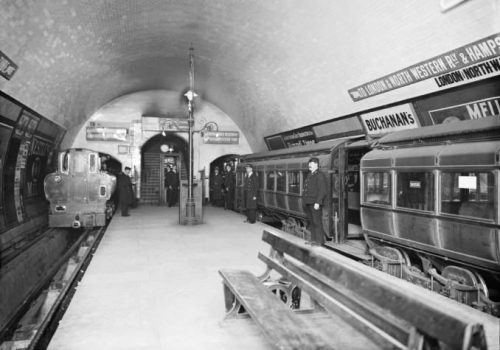 However a limiting factor this pioneering railway was the narrow tunnels, limiting the size of trains that could operate on the line, and blocking the extension of the City and South London Railway route onto newer tube lines built with larger tunnels.

As a result, in 1912, the City and South London Railway submitted a bill for Parliamentary consideration seeking to enlarging its tunnels to a larger diameter to increase capacity, alongside a separate bill to build a connection at Euston to the Charing Cross, Euston and Hampstead Railway tube lines. These bills were passed but World War I intervened, with work to expand the tunnels finally starting in 1922. 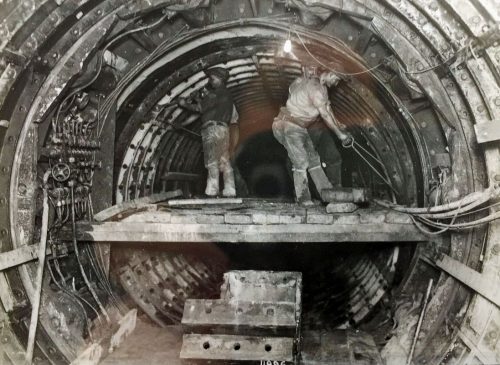 Photo from The Wonder Book of Railways by Harry Golding

After Extensive Changes Taking Two Years, Including Enlargement of the Tunnel and Modernization of the Stations and Rolling Stock, the City Railway Has Inaugurated Through Service with Other London Underground Lines.

The City & South London Railway of London, England, which has been closed in parts for about 2 years during the work of enlarging its tubular tunnels, was reopened for traffic on Dec. 1, 1924, throughout its entire length of more than 7 miles. At the same time joint services were established with the Charing Cross & Hampstead Railway via the new junction between the two lines at Chalk Farm, through trains being run from the City & South London line to Highgate on one branch and to Hampstead and Edgware on the other.

Down to the time of the reconstruction now completed the tunnels were of only from 10 ft. to 10 ft. 6 in. diameter, with an 11-ft. 6-in. bore for a short distance. The cars accordingly were far from roomy, and they were hauled by small electric locomotives.

The management of the various railways then entered on a scheme for extending them in various directions and for linking them together. No through running, however, could be carried out in the case of the City & South London, as its tunnels were too small to admit of the standard size rolling stock used on the other tube railways. It was decided to enlarge the diameter of the City & South London tunnels to the size of 11 ft. 8-1/2 in. standard on the London Underground lines, and to make a junction with the Charing Cross & Hampstead Railway at Chalk Farm. This is the work which, after 2 years of construction, has now been completed. The electric locomotives have been abolished, the small old cars done away with, and new multiple-unit rolling stock similar to that on the other tube railways, which was described in this paper substituted.

How the tunnels themselves were enlarged. 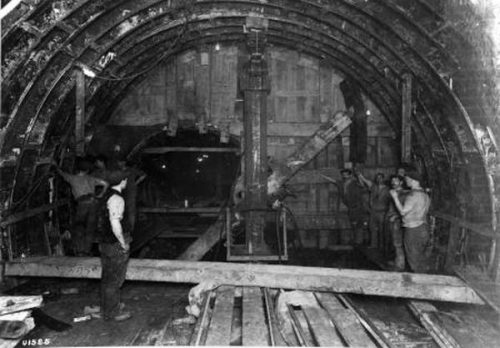 To enlarge the tunnels, the whole of the cast-iron lining segments were removed ring by ring, and as the tunnel was reamed out by the Greathead boring shield the lining was built up again, partly with new segments. On curves the tunnels have been enlarged to from 12 ft. to 15 ft. in diameter. The curves have been smoothed out and the general running conditions improved. The work was one of great difficulty, as during part of the period of reconstruction train services were continued in the daytime. Owing to the infiltration of water, work on some sections had to be carried on under compressed air.

And the upgrades made to stations. 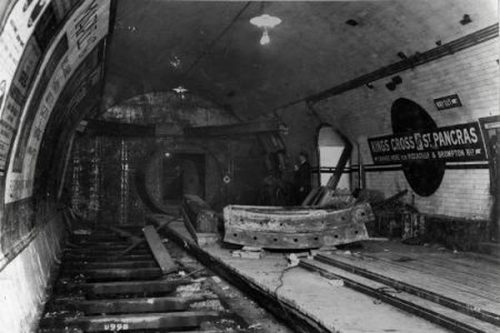 To match the higher passenger capacity possible with the new larger trains.

Improvements have been carried out on many of the passenger stations, some of which have now their booking halls under the street level. Escalators in many cases supersede lifts, and everything has been brightened up. New track and new conductor rails have been installed, the running rails consisting of London standard 85-lb. per yard bull-headed section, laid on chairs bolted to wood sleepers. The positive and negative conductor rails are of special high-conductivity steel. The latest system of automatic signaling has been installed.

The northern section of the C&SLR between Euston and Moorgate was closed from 8 August 1922, but the rest of the line remained open with enlargement works taking place at night.

A collapse on 27 November 1923 caused when a train hit temporary shoring on the incomplete excavations near Elephant & Castle station filled the tunnel with soil. The line was briefly operated in two parts, but was completely closed on 28 November 1923.

The Euston to Moorgate section reopened on 20 April 1924, along with the new tunnels linking Euston to Camden Town. The rest of the line to Clapham Common reopened on 1 December 1924.

Resulting in the stations seen today, on what is now called the Northern line.

Photo by Sunil060902, via Wikimedia Commons

Even after the tunnels were expanded, London ‘tube’ trains are far smaller than normal British mainline trains.

And even British mainline trains are small compared to what the North American loading gauge allows.