Onboard the trams of Amsterdam is a strange sight – customer service counters!

The customer service counters are located onboard 151 Combino trams operated by GVB. 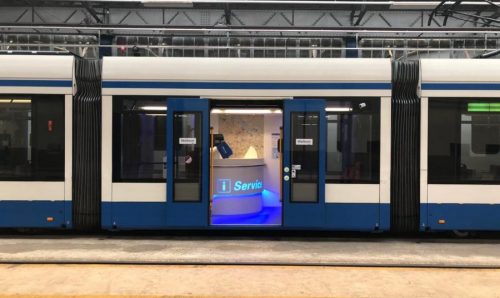 And replaced an enclosed conductor cabin.

Photo by User:Willem_90, via Wikimedia Commons

A better passenger experience was the driver for the change.

All conductor cabins in trams will be replaced by a service desk. This service desk improves the contact between conductor and passenger, according to a test we conducted in recent months on lines 1 and 2. Travelers feel more welcome and better served.

Mark Lohmeijer, director of operations & technology: “GVB wants to become the best city transport operator in the Netherlands and believes that this can be achieved by treating travelers with hospitality in a personal way. The service desk supports this in various ways. We notice that the openness of this service concept is well received by both travelers and employees.”

With a single tram converted in 2018 as a prototype.

After a thorough evaluation of the test with those involved, some adjustments were made to the test design, such as a different seat and more room to move for the conductor. The first tram with the definitive service desk will run from 23 February, alternately on lines 1 and 2.

The conversion of the remaining 150 Combinos is expected to be completed in October 2018. The first converted tram will be festively inaugurated with passenger-oriented surprises on board and a special visit between 10 am and 12 noon and between 2 pm and 4 pm.

And conversion of the remainder of the fleet following soon after.

The conversion took place from the end of February to the end of October 2018 in our Lekstraat tram depot. A professional team of technicians and fitters worked there from early in the morning until late at night on the conversion. In a time frame of 15 hours by tram, both the conductor’s cabin was dismantled and the service desk was completely installed. In the video below you can see that process accelerated, in 50 seconds.

German-language Wikipedia has an article on “Schaffnersitz” – which translates to “conductor’s desk”.

Schaffnersitz is a – now largely extinct – facility in a tram, trolleybus or bus that serves as a permanent workplace for the conductor for tickets sales or for ticket inspections. It is usually a waist-high enclosure arranged in the entry area of ​​the vehicle, with the conductor usually sitting with his back to the window and serving the passengers from the side or front. Completely closed conductors’ cabins are less common.

The conductor’s desk is usually elevated above floor level, so that the door areas can be overlooked, and include:

– desk with payment tray, often with integrated coin dispenser
– microphone to make stop announcements
– departure signal to the driver, as a replacement for the traditional bell cord
– buttons for door operation, if this is not done by the driver

Conductor’s desks are usually used in conjunction with “fahrgastfluss” (“pay-as-you-enter”) operations, where passengers board via one door, pass the seated conductor, then exit via any of the other doors. Sometimes conductor’s desks are only used during the busy rush hour periods, with the tram driver taking over fare collection duties off-peak.

Occasionally there were also long articulated trams with two conductors’ seats, an example of this was the Stuttgart type SSB GT6 . In this case, the two conductors sat in front of and behind the joint, each responsible for one half of the car. Even bidirectional vehicles sometimes had two conductors’ seats so that passengers could always get on at the back as usual, regardless of the respective direction of travel.

Wikimedia Commons also has many more photos of conductor’s desks. 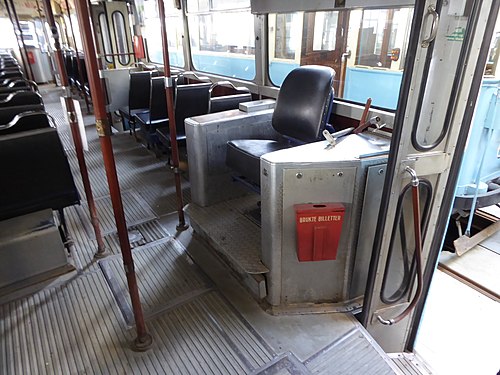 And closer to home

Melbourne’s Z1, Z2 and Z3 class trams once had conductor desks – some photos here – until they were replaced by ticket machines in 1998.

This entry was posted in Trams and tagged Amsterdam, Netherlands, rail operations. Bookmark the permalink.