What happens if you combine a turntable with a train lift?

Turntables are a common sight on railways, allowing rolling stock to be turned around. But the Kiev Metro had a unique piece of engineering at their first train depot – the «Метролифт» (metrolift) that combined turntable with train lift. 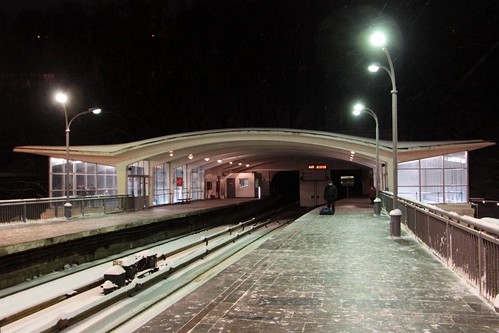 Construction of the Kiev Metro commenced in August 1949, with the first stage running 5.24 kilometres from Vokzalna and Dnipro. Due to the deep level construction of the line, the new line only reached the surface at one location – Dnipro station, where the metro met the Dnieper River on an elevated viaduct. 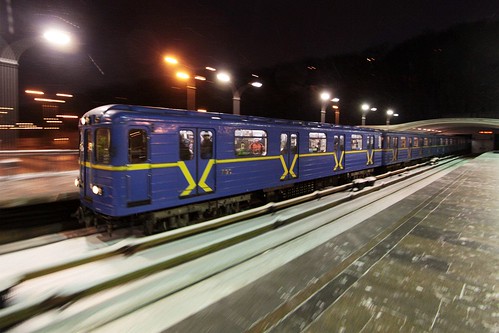 Delays in construction saw tunnels towards the proposed depot at Shulyavskaya postponed to a later stage, so the search began for a replacement location. Construction of an underground link at the Vokzalna end of the line was rejected, leaving Dnipro station as the only option. This constrained location made provision of a railway depot difficult, with the river bank preventing the construction of a curve back to ground level. The solution – a temporary depot beneath the viaduct, accessed via the rotating train lift – the «Метролифт».

Photo via Central State Film and Photo Archive of Ukraine

The train lift was the length of a single metro carriage, and would lower each car from the elevated station to ground level, where the train would be rotated 90 degrees to meet the depot tracks. The depot was constructed parallel to the Dnieper River and had space for the repair of two carriages at a time. Equipment included a gantry crane, repair shops, and a warehouse for spare parts and materials.

Delivery of metro trains to the depot was equally convoluted. Each carriage was delivered from the Mytishchi Machine-building Factory by rail to Darnitsa station, where a temporary ramp around 150 meters long was constructed towards the neighbouring tram line. Each carriage was place on temporary bogies so that it could negotiate sharp tramway curves, and then transferred via the tram network, crossing the Dnieper Rover via the Paton Bridge, until it arrived at the temporary depot, where standard bogies were then reinstalled. 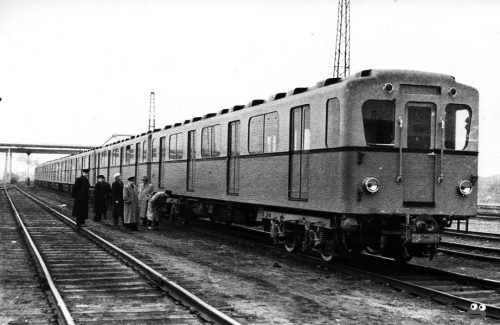 On 21 October 1960 the first metro carriage was lifted up onto the viaduct at Dnipro, and a test train ran the next day. The new line opened to the public on 6 November 1960.

Due to the difficulty in accessing the depot, the majority of trains were stabled overnight in the running tunnels, only being lowered to ground level for major inspections and repairs. This procedure remained in place until 1965, when the eastern extension of the Metro to Darnytsia was completed, including the Darnytsia електродепо (electric depot) between Livoberezhna and Darnytsia stations.

Photo by xan, via Wikimedia Commons

The new depot also made the delivery of new trains to the Kiev Metro system much easier – trains transferred from the mainline network thanks to a Трамвайно-залізничний гейт (tram-rail gate) provided at the neighbouring Київ-Дніпровський (Kyiv-Dniprovsky) station.

The remains of the metrolift at Dnipro station were removed in 2011, but the replacement Darnytsia depot still has a turntable for the turning of metro carriages.

Photo by Artemka, via Wikimedia Commons

And at the Kiev Metro Museum they have a scale model of Dnipro station, including the temporary depot and Метролифт. 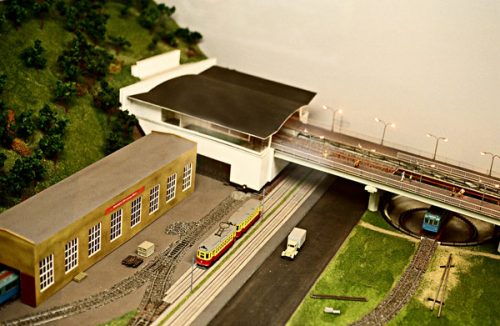 And a similar situation in London

The Waterloo & City line on the London Underground is shuttle service that runs between two stations, with no surface connection for trains. Instead the depot is located underground, with a vertical lift once used to transfer rolling stock to and from the tunnels, until it was replaced by road cranes. 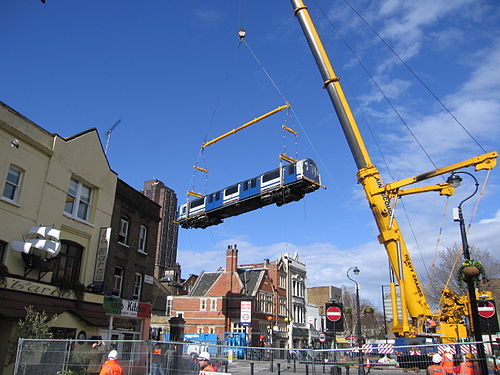 1 Response to What happens if you combine a turntable with a train lift?