Recently I came across an interesting photo on Twitter – a grass covered set of escalators headed underground somewhere in Rome. An abandoned metro station, or something else?

One of those Rome projects that didn’t quite work out…. pic.twitter.com/FQS59U943u

I found a set of photos showing the same location over on Imgur.

And I eventually found the location.

Which allowed me to eventually find the site. 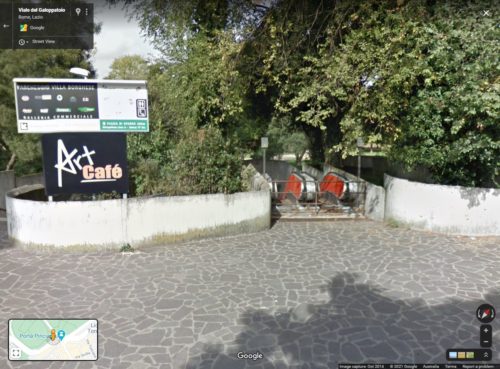 But it took a while to pin down – from the air I found a few possible locations, but none of them matched on Google Street View. Turns out the escalators were boarded up in 2018, removing them from view, so I needed to go back in time to see them.

About the car park

Luigi Walter Moretti was an Italian architect known for his postmodern designs, and the car park at Villa Borghese was constructed between 1966 and 1972.

Architectuul describes it as.

The car park is in the city center of Rome and has been built at the end of the 1960s in order to solve the problem of the increasing number of cars in the tourist area of the Italian capital. The parking is completely underground and hasn’t changed the original topography. The 13.5m square structural grid of concrete umbrella pillars supports the prefabricated domes and a coffered roof. Circular’s eyes give rhythm light and air.

The car park, designed to accommodate up to two thousand cars, is spread over two underground floors for a total of 3.6 hectares. The structural system foresees a square grid of 3.30 m, which organizes the position of the reinforced concrete pillars, while some parts of the floors are made using prefabricated components. In addition to the car park, the structure includes a 6000 square meter shopping center. After construction, the greenery was completely restored, ensuring the continuity of the park in Villa Borghese even above the imposing structure.

While Dianne Bennett and William Graebner went exploring the complex in 2013.

It was a lovely afternoon on via Veneto, and so we naturally decided to explore–hope you’re ready for this–an underground parking garage!

The garage is by Luigi Moretti. It houses 1800 spaces for automobiles, 210 for scooters and motorcycles. It was completed between 1965 and 1972, which accounts for the hybrid look of late modernism and early brutalism (the concrete noted earlier).

Whatever its appeal, it was sufficient to lure a major international modern art exhibit–known as Contemporanea–which inhabited the structure in 1973, a moment when such an idea could not only be imagined, but brought to fruition.

The garage’s architectural reputation would seem to rest (like the garage itself) on its graceful, space-age columns, and on its concave roof treatments, with a nod to the occasional provision for natural light.

And YouTuber Alessandro Califano went on a drive through the car park in 2010.

And the future – the private operator is planning to expand it.

The project involves the extension of the existing underground car park which, with the 200 new car park places included in this reform, will reach a total of 2,000 places distributed over three floors. Saba will also develop a new tourist bus parking area, connected to Rome’s public transport system, comprising 81 places, as well as the expansion of retail space and storage complex up to the 19,540 meters square (it currently measures 11,030 square meters).

This also includes the construction of an operations and maintenance terminal for electric buses with capacity for 125 vehicles, which will be used by the municipal public transport agency. Management of the existing parking area for motorcycles with capacity for 206 spaces is included as well.

Finally, a residents car park with 360 spaces will be constructed, located on the third floor of the complex. This action will go along with the construction of a mechanised walkway that will connect the car park to the Piazza del Popolo via a pedestrian subway. The construction is subject to the premarketing of 80% of the spaces for residents, a presales period that will last six months.

The 1972 journal article ‘The Villa Borghese car park in Rome‘ describes the newly opened strucutre – but unfortunately it seems to be unavailable online.