Battery-electric locomotives of the Moscow Metro

On the Moscow Metro can be found a curious piece of rolling stock – Контактно-аккумуляторный электровоз – battery-electric locomotives converted from retired metro carriages to haul maintenance trains through underground tunnels.

Photo by Anakin, via Wikimedia Commons

The seats have been removed from the passenger saloon. 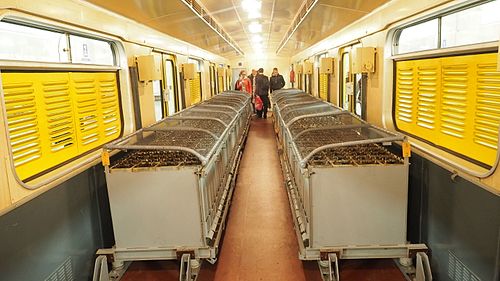 Intermediate 81-714 carriages were used as a basis for the conversion, with driving cabs and marker lights retrofitted at each end. To allow the locomotives to work with various types of rolling stock, both ‘railway’ SA-3 knuckle couplers and ‘metro’ Scharfenberg automatic coupler were installed at each end.

Recharging of the batteries is possible via the 750V contact rail or from a 380V AC power supply, and once fully charged the locomotive can operate autonomously for 7-8 hours, with up to 30 starting and braking cycles per hour. On level ground the locomotive can haul up to 300 tonnes at 50 km/h, reducing to 70 tonnes on a 6% grade.

The Moscow Metro is also fitting backup batteries to their newest trains so they can continue to the next station in the event of a power outage.

Saft won a major order from Metrowagonmash to provide a battery power system to provide emergency traction power for new rail cars destined for the Moscow Metro. The project is Moscow Metro’s first use of onboard batteries to prevent trains being stranded between stations in the event of a power outage.

Saft MSX nickel technology cells will be installed underneath the floor of the new ‘Moskva-2020’ coaches. The batteries enable trains to run on their own autonomous power for distances up to 6.5 km and on gradients of up to four percent – the maximum on the network.