Turning a locomotive on a reversing star

There are many ways for a locomotive to be turned – reversing loops, turntables, and triangular junctions. But there is one bizarre track configuration that can also do the same job – a reversing star. 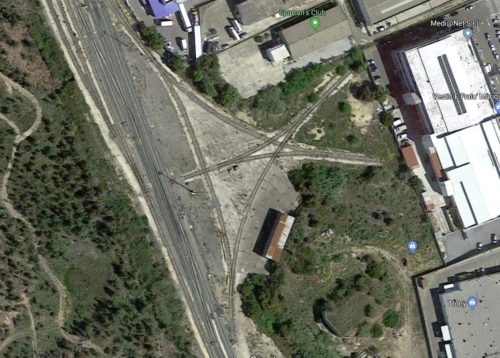 Reversing stars were common on the railways of Italy, where they are known as Stella di inversione – Italian language Wikipedia describes them further.

The reversing star is configuration of railway tracks in the shape of a five pointed star that allows the reversing of an asymmetrical rail vehicle, such as a steam locomotive, in a limited space.

The reversing star is functionally equivalent to a turntable or return loop. Identical functionality can be obtained through a star configuration with an arbitrary number of points, as long as they are odd. In reality, in addition to the pentagram inversion star, only the reversing triangle is used.

Being a fixed installation, the reversing star requires less maintenance than the turntable and therefore was for this reason preferred to it in some cases. Compared to the reversing triangle, more widespread in the United States , the number of manoeuvres required is greater, but the space occupied is much smaller. The dimensions are also much smaller compared to the return loop, but it has the advantage of being able to reverse an entire train.

And how they are used to turn a train.

The star consists of five segments, two of which are usually connected to the main track for entry and exit, while the other three are dead ends. Alternatively, a single entry / exit track can be provided with four dead end tracks. There are a total of five sets of points, one at each vertex of the star, as well as three diamond crossings.

The locomotive coming from the mainline enters the star from the access track and proceeds on the first leg. After switching the points, the locomotive moves back to the second leg, then advances on the next leg and then moves back onto the exit track, returning to the mainline with the front facing the direction opposite to the one at the entrance.

At least five reversing stars were built on the railways of Italy.

Malles Venosta is in South Tyrol, and opened in 1906 as the terminus of the newly built Val Venosta railway. It closed in 1990, but reopened in 2005. The reversing star was built in 1930, and is still operational today for the use of tourist trains.

Photo by Roehrensee, via Wikimedia Commons

Photo by Whgler, via Wikimedia Commons 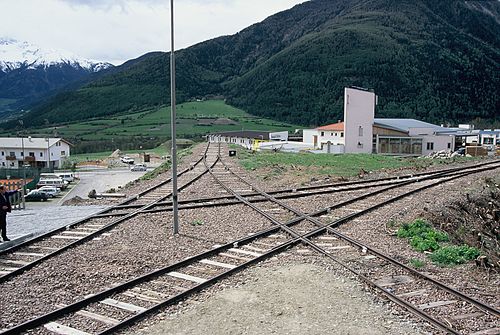 With at least one HO scale model version also existing.

Carbonia Stato station in Sardinia opened as the terminus of the Villamassargia-Carbonia railway in 1956, with a reversing star provided instead of a turntable.

Today the line is used by tourist trains.

Photo by Alex10, via Wikimedia Commons

Oristano station in Sardinia opened as the terminus of the San Gavino Monreale railway in 1872. A reversing star was provided by World War II, with the remaining in place until 2013, when the tracks were dismantled. 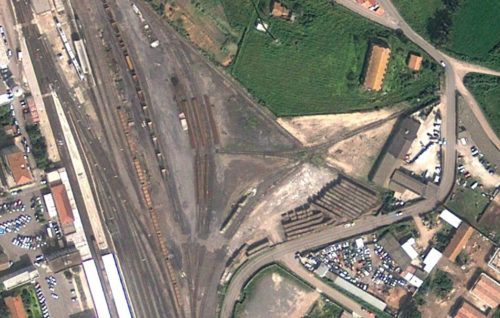 Reversing stars were installed at stations of Brennero and San Candido following World War I, when the division of Tyrol under the Treaty of Saint-Germain-en-Laye, which created a need for locomotives to be turned at the new national borders.

Photo by Llorenzi, via Wikimedia Commons

Both stations remain open to trains today, but the reversing stars have been removed.

This one isn’t a true reversing star, but a complex arrangement of track to the west of Verona Porta Nuova station that allow a complete train to be reversed. 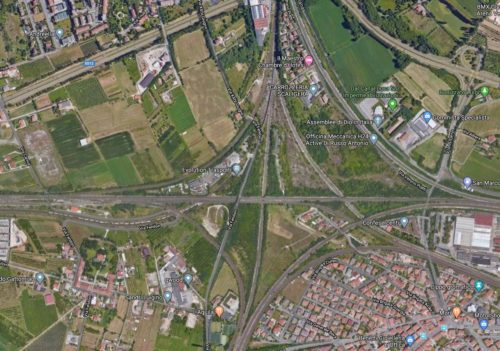 2 Responses to Turning a locomotive on a reversing star