I’ve fallen down a rabbit hole leading to underground stations built on operating railways, and I’ve found another one – Suvorovskaya (Суворовская) station on the Moscow Metro’s Koltsevaya Line – better known as the Circle Line.

The story starts in the 1950s when work started on the Koltsevaya Line that would eventually encircle central Moscow, with interchange stations along the way providing passengers a shorter journey between different sides of the city. The decision was made to safeguard the development of a future station beneath Suvorov Square, located between Novoslobodskaya and Prospekt Mira stations, so the tunnels were constructed straight and level, with enough space between them for a central hall and side platforms.

However a use for the future station didn’t emerge until until the 1980s, when planning for the Lyublinsko-Dmitrovskaya line (Line 10) commenced. Work started on an interchange station between the two lines, but the 1990s economic slowdown intervened, and it wasn’t until 2010 that the two lines finally crossed paths with the completion of Dostoevskaya (Достоевская) station on the Lyublinsko-Dmitrovskaya Line – but without a matching station on the Koltsevaya Line.

Work on Suvorovskaya station started via two underground shafts in 2011, but was halted 2013 due to difficult ground conditions and high cost, and formally abandoned in 2017. However in 2019 the project was restarted, with a 2023 completion date given.

During the 1990s five different construction methods were proposed to complete the new station at Suvorovskaya – all of which involved opening out the running tunnels like Tverskaya station elsewhere on the Moscow Metro. 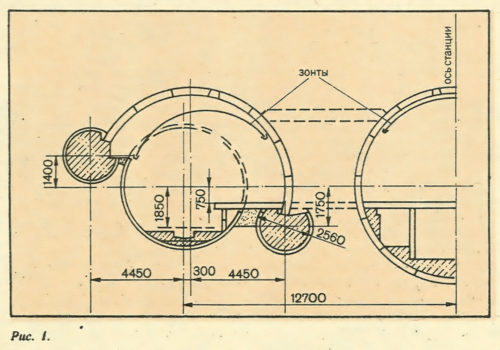 But by the time that the project was restarted in 2011, plans had changed – a pair of 700 metre long bypass tunnels would be constructed around the station site, allowing trains to keep running – similar but not the same as the retrofitting of Teatralna station to the Kiev Metro.

And now the 2019 planners have a third option – close each tunnel of the Koltsevaya Line in turn, with passengers diverted to the recently completed Moscow Central Circle, which also links metro lines outside central Mowcow.

This entry was posted in Trains and tagged construction, metros, Moscow, Moscow Metro. Bookmark the permalink.