Retrofitting an underground station to the Kiev Metro

How does one go about retrofitting a station to an existing underground railway? It was was problem that Ukrainian engineers solved in the 1970s, when Teatralna (Театральна) was added to the Sviatoshynsko-Brovarska Line of the Kiev Metro system.

The first section of the Sviatoshynsko–Brovarska line opened in 1960, running between Vokzalna and Dnipro stations. Early plans included a station serving the National Opera, but it was dropped, leaving a gap of more than 1.5 kilometres between Universytet and Khreshchatyk stations. 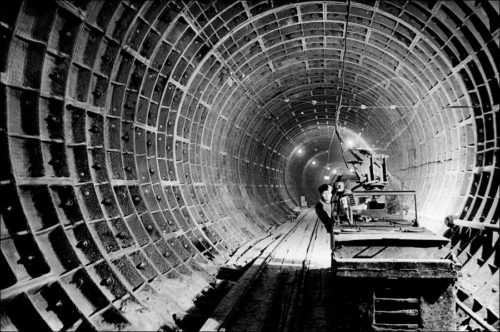 In the years that followed the Kiev Metro was further expanded, and by the 1970s a third line was being planned – the Syretsko-Pecherska line.

An interchange between the new and old lines was required, but since the new route didn’t pass through any existing stations, the decision was made to retrofit a new station to the existing Sviatoshynsko-Brovarska line – to be named Teatralna.

Work started on 23 February 1983 with a projected completion date in 1986, but was delayed due to the economic state of the Soviet Union.

To avoid disrupting metro services, construction of the new interchange station was broken up into three stages:

The changeover between old and new tunnel was completed between April 1 to October 1 1987, with the metro line between Universytet and Khreshchatyk stations closed to passengers. At each tie-in point, 580 meters of the existing tunnel was filled in, allowing the replacement tunnel to be excavated on the new alignment, without risk of ground subsidence or tunnel collapse. 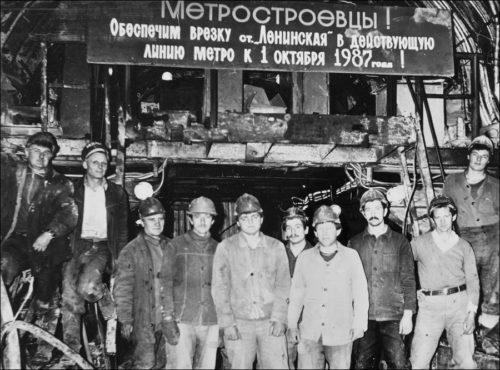 While the work was being completed, trains ran in two sections: Lisova to Khreshchatyk and from Sviatoshyn to Vokzalna, along with a shuttle train running between Vokzalna to Universytet via a single track. The disrupted metro line normally carried 400,000 people per day, so four new bus and three new trolleybus routes were opened bridging the closed section; five bus and two tram routes received additional rolling stock; and four trolleybus routes were temporarily rerouted.

The job was originally planned to take 700 people nine months, but with additional staff working around the clock, the changeover was completed in six months. Metro services on the line resumed on October 1, and the new station at Teatralna opened a month later on November 6 – the eve of the 70th anniversary of the Great October Revolution.

Once the new tunnels were in use, part of the old tunnels needed to be dismantled to make room for the station vault at Zoloti Vorota station on the Syretsko-Pecherska line. This station was located 90 degrees to the existing line with the upper level of the station vault passing through the disused tunnels, so a short section was filled with concrete, leaving just a narrow walkway through them. 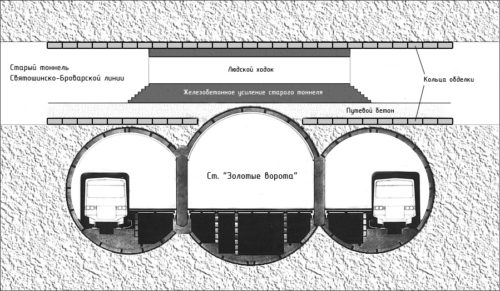 Work could then continue on Zoloti Vorota station and the Syretsko-Pecherska line in the normal way, with the line opening on December 31, 1989.

The track and rail has since been removed from the redundant section of tunnel, but they are still maintained, forming part of the ventilation system for the metro system.

But in 2014 Kiev urban explorer Олег Тоцкий suggested turning the tunnels into a metro museum.

How many of you have been to the Kiev metro museum? And how many of those who were not in it know where it is and how to get into it? Unfortunately, visiting the current museum of the Kiev metro is not so simple. Due to a number of organizational issues, this can be done only on weekdays and only by appointment. But there is something to see and listen to in the museum. Once upon a time there were ideas in the air about moving the museum to the building of the former depot near the Dnipro metro station, but they still remained unrealized, and the depot building was already gone.

But this is not about that at all. In Kiev, there is a place that asks for a metro museum. Why is there a museum: the place itself is very unusual and could become one of the most interesting tourist points in Kiev. Some of the readers have probably already guessed that the place in question is the old tunnels of the Universytet-Khreshchatyk section, which were later replaced by the Teatralna station.

These tunnels were built back in the 50s and were part of the very first section of the Kiev metro. If you put the tunnels in order and organize a civilized entrance in them, they can become a very cool tourist feature of Kiev. Well, the idea of ​​a metro museum somehow asks itself for this place.

Here you can place a unique and interesting exhibition dedicated to the Kiev metro; virtually the same project”Metro, which is not” , but created on a whole new level. The exposition can be significantly expanded compared to the current museum, in which space is now extremely limited. You can install mock-ups and samples of various metro equipment that is not available to passengers in everyday life.

The practical implementation of this idea has only one uncertain point: how to organize a safe and convenient entrance to the tunnels for visitors. Now access to the waste tunnels is possible from five points. Three of them are operating tunnels along which trains run, one more is the office premises of the Golden Gate station, and the fifth point is wentshacht No. 5. That is, there are very few options and it is possible that you will have to build a separate entrance. And this is a significant investment.

The idea was picked up by local media, including DreamKyiv and Segodnya, but unfortunately the idea never led to anything.

3 Responses to Retrofitting an underground station to the Kiev Metro