Modern low floor trams are made up of multiple articulated segments, which allow these long vehicles to make their way around sharp corners. But this 2018 crash in the German city of Bochum shows another thing these trams can do – bend like a banana. 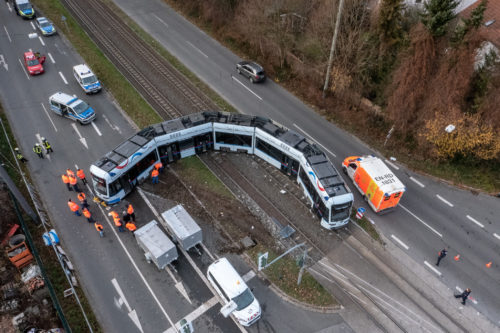 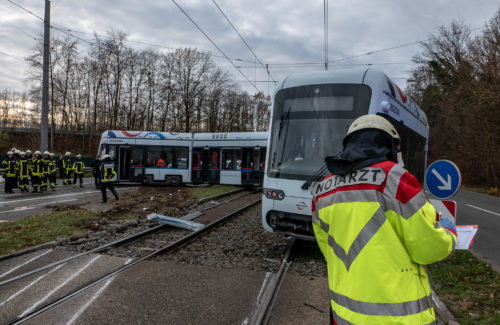 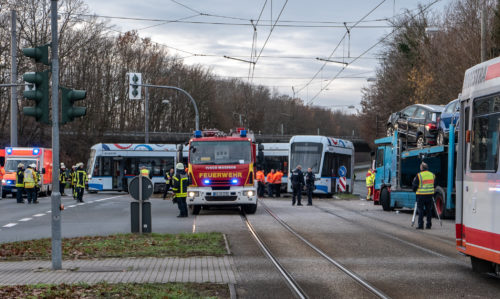 This media release by the Bochum Fire Department explains how this tram came to be in such a precarious position.

Traffic accident between truck and tram calls for 11 injured persons

At 1:33 pm, the Bochum Fire Department was alerted to a traffic accident on Wittener Straße in the crossing area “Alte Wittener Straße”. A truck car transporter collided there for unknown reasons with a Bogestra railway.

As a result of the collision, the track was lifted completely out of the rails and thrown sideways. 11 people, including 5 teenagers, were injured in the impact. 6 people suffered severe, but no life-threatening injuries, 5 others were slightly injured. The fire brigade was deployed with 55 forces. The crew of 5 ambulances, two ambulances and two emergency doctors provided the injured on the spot before they were transported to various hospitals. Rescue operations were coordinated by a senior emergency physician.

The employment of the fire-brigade was finished at 15.45 o’clock. The recovery of the railway was initiated by the Bogestra and will take several hours. During this time, Wittener Straße is completely closed in the area of ​​the accident site.

The police have started the investigation into the cause of the accident.

The affected tram was Variobahn #114 on route 302. You can see the site of the crash on Google Street View – the tram route runs in the median strip of a divided highway.

Trams in Bochum are operated by BOGESTRA, with their fleet of Stadler Variobahn trams entered service between 2010 and 2018. 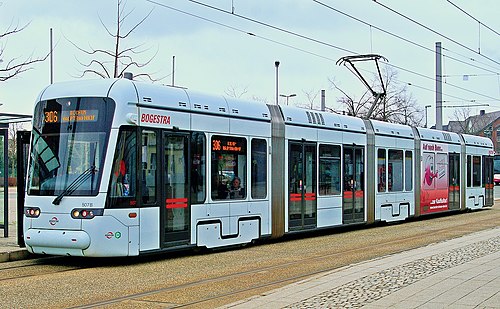 Photo by IPRobin, via Wikimedia Commons

This entry was posted in Trams and tagged accidents, Germany, light rail, motoring. Bookmark the permalink.