Reversing a tram in Düsseldorf, Germany

On the tram network of Düsseldorf, Germany is a curious terminus arrangement – a turning wye that crosses over itself!

This triangle is found at the route 706 terminus in Hamm, at the corner of Auf den Kuhlen and Kuhstraße.

And is needed so that Düsseldorf’s single ended trams can change direction, before their return journey to the city.

Arriving trams take the left leg of the triangle.

Then change direction and reverse through the loop, which crosses over the inbound track.

Before ending in the second track stub, where the tram can now head forward again.

Confused? You can watch a tram traversing the triangle here.

And I’ve marked the route on Open Street Map!

So why is such a convoluted terminus arrangement needed? Linie D (Arbeitsgemeinschaft historischer Nahverkehr Düsseldorf) explain why in this history of trams in Hamm (German language):

There has been a tram connection to Hamm since 1924, when the line 8 of the Hafenamtsstraße (today’s area Franziusstraße) was extended. The line designation 8 (708) belonged until the year 2016 firmly to Hamm, only in connection with the new line network of the Wehrhahnlinie changed the line number on the 706.

Today the journey is a varied tour out into the country. In the last section fields are passed through and also the terminal is a special feature, because here is the last track triangle in the Rheinbahn network.

The then line “8” was one of the last Rheinbahn routes still using two-axle trams. However following the 1965 introduction of new Düwag articulated trams, which had doors only on one side of the wagon, the Kuppelendstelle (stub terminus) just before the railway embankment at the end of Kuhstraße was not sufficient. Due to a lack of space for a new turning loop between the fields, a turning triangle with a “creative” track layout was created instead.

The German word for a railway triangle is Gleisdreieck.

You can find route 706 to the bottom left of this diagram of the Düsseldorf tram network. 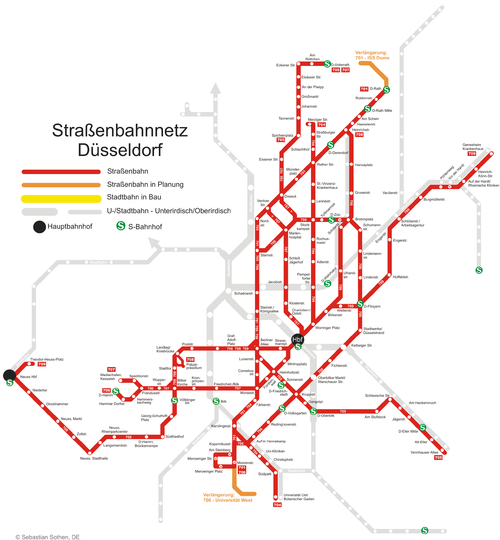 Photo by Sylver81, via Wikimedia Commons

This entry was posted in Trams and tagged Düsseldorf, Germany, Rheinbahn. Bookmark the permalink.

2 Responses to Reversing a tram in Düsseldorf, Germany