Trams and freight trains share the road in Bremen

I’ve written about freight trams before, but in the city of Bremen in northeast Germany freight there is something a little different – a freight siding that shares the tram tracks.

The freight siding joins the route 3 tram tracks on Eduard-Schopf-Allee via a level crossing. 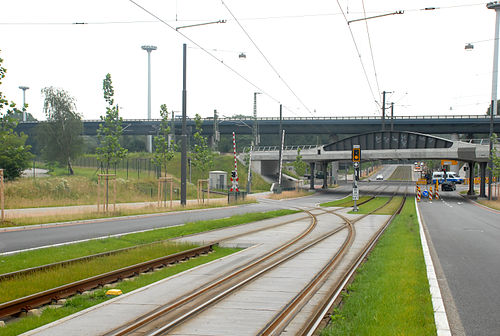 Road traffic is protected by boom barriers and flashing lights. 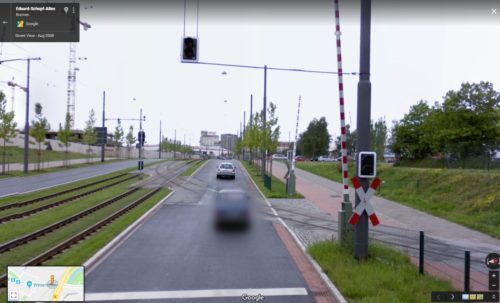 As is the parallel bike path. 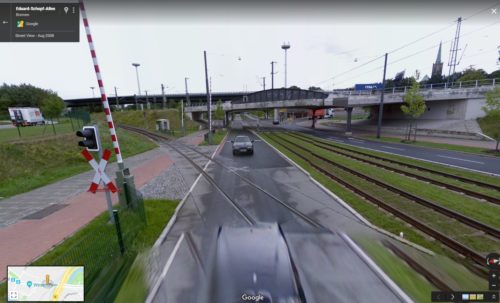 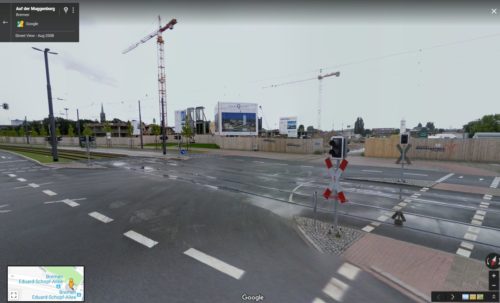 Until they reach the Kellog’s factory. 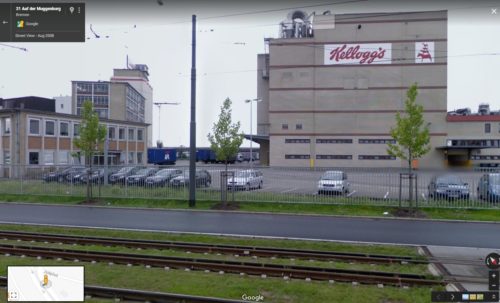 Where the freight siding leaves the tram tracks.

This time without any boom barriers and flashing lights for cars. 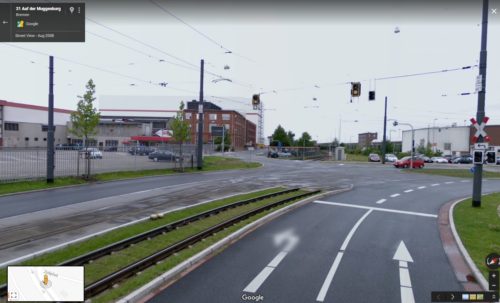 The gauntlet track is marked in blue.

Derived from this diagram by Maximilian Dörrbecker

And in relation to the wider Bremen tram network: 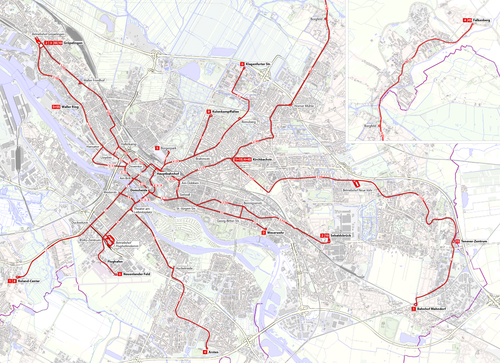 The German-language Wikipedia article on Straßenbahn Bremen explains why it was built:

Line 3: The new route through the Überseestadt , between Hansator and Faulenstraße, parallel to the previously existing route was opened in December 2006. The inland track was built over a distance of about 800 meters as a four-track track, because here in addition to the tram and the freight trains to Kellogg’s company operate in the bidirectional operation. The previous route in Hans-Böckler-Straße has been preserved as operating route.

It also has a history of the Überseestadt district:

The urban development project Überseestadt includes the district Überseestadt (formerly Handelshäfen) and belonging to the district Steffensweg Waller Wied. It extends between the districts Mitte and Gröpelingen along the Weser. The area is 4.5 kilometers long and one kilometer wide. On the land side, it is bounded by Hans-Böckler-Straße / Nordstraße / Bremerhavener Straße.

Überseehafen and Europahafen were classic general cargo ports. In 1964, the time of the container began in Bremen. In 1966, the first container ship released in Europe, the Fairland, made its way to the overseas port. Since 1967, consisted in this port a temporary facility for RoRo ships. In the subsequent period, the cargo volume went back – the general cargo freight ended in the 1980s. New ships were built with more capacity and depth, so that the 19th-century ports, the associated storage areas and the Weser were too narrow for modern needs. Also the equipment of the two ports with RoRoTerminals in 1967 and 1972 could not stop their economic decline.

Due to considerable dilapidation of the wharves, the overseas port was closed in 1991. As there was no longer any need for the port and its security was too costly, the harbor basin was filled in 1998 with approximately 3.5 million cubic meters of sand, which came from dredging in the outer Weser. This was the basis for the urban development project “Überseestadt”.

The Bremen Senate decided in 2000 the “Development Concept for the Restructuring of the Old Port Districts in Bremen”. In 2003, the “Master Plan Überseestadt” was adopted. The Europahafen will continue to exist as a harbor basin, but there will be no harbor-typical use. The water surface is mainly used by recreational shipping, on the north side was the Marina Europahafen, The adjacent land is reserved for service and residential purposes.

And a few German railfans explain how trains and trams share the single track:

Because of the relatively low rail traffic (Kellog is the only remaining user of the rail connection) it was decided at the time of planning the new route, for reasons of space, for rail and tram to share.

Because of the same gauge the tram and railway could have run the same track; but that would have required a total of four switches, as there is a tram stop in the stretch. With only two train journeys every working day (once each way back and forth) the effort would have been too great, and so it was decided to invest in the four-track track.

Once the shunting has been completed, DB will report the intended passage to the BSAG tramway control center. There is a separate screen for this route, on which the events are monitored. The control center blocks the section for trams and releases the passage for the train (correctly, it should actually be called “shunting unit”). If the train has passed through the section completely, the route for the tram is released again.

The same procedure then takes place on the return journey.

The gauntlet track is slightly offset on the inside of the tram track to protect the stop to be passed on the way. On the siding, even parallel tram operation is possible thanks to sufficient track center distance, as long as the freight train has cleared the track crossing near the Oldenburg Railway! Everything is naturally signal-protected. The tram operation is thereby stopped only about 2-3 minutes.

But unfortunately for railfans this interesting operation is no more: Kellogg’s announced the closure of their Bremen plant in 2016, with the final trains running in 2018.