Why did the train stop to close the bridge?

On Facebook I recently came across a video of a train coming to a halt, so that a man could swing a piece of track into place before it could then proceed. So what is the story behind it?

The original poster didn’t have any idea – it was a Facebook Page called “Emmanuella Mark Angel Comedy Video (fk Comedy)” that stole the video from YouTube.

The comments from other Facebook users didn’t help either:

Waste of precious time, why cant they automate the whole thing

This so called track bridge doesn’t make sense. They could have fixed a gates on either side of the road.

What is the point? Why don’t they just leave it in position?

But some people were switched on:

The train crosses a canal on the turntable bridge then crosses the road. They close the canal then close the road

Too funny all these people here acting like we Dutchies are still stuck in medieval times …jumping to conclusions based on one video without bothering to investigate what this really is (a museum line).

With those leads and plenty of digging around on Wikipedia, I found the Stadskanaal–Zuidbroek railway:

The Stadskanaal–Zuidbroek railway is a railway line in the Netherlands running from Stadskanaal to Zuidbroek, passing through Veendam. The line was opened in 1910 and closed in 1953. The Veendam-Zuidbroek part of the line was reopened in 2011 by STAR and used as a museum line, run with mostly steam trains.

The Stichting Stadskanaal Rail, known as Museum Railway STAR, was established on 26 June 1992 with the aim of maintaining the historic Veendam – Stadskanaal – Musselkanaal railway line and operating a tourist railway on this route.

And the train – a Nederlandse Spoorwegen DM 90, nicknamed ‘Buffel’.

The NS Class 3400 was a series of diesel multiple unit built by Duewag, Talbot and SIG between 1996 and 1998. The class is referred to as DM’90 meaning diesel rolling stock (Diesel Materieel in Dutch) of the 1990s or Buffel, which means Buffalo. Class 3400 were the last DMUs in service with NS, the older DE3 (“Plan U”) and DH1/2 (“Wadloper”) series having been replaced by the diesel electric Stadler GTW which are still in use with other operators in the Netherlands. Since January 2018, all units are now stored out of service and most have been sold to Romania.

Which eventually led me to the original video on YouTube.

The farewell ride stops in front of the swing bridge (honking a lot) and the train stops so that the swing bridge can be closed and the HBKI level crossing can be switched on, after which he whistles off to Veendam museum station where a short stop took place.

Exactly at 8 minutes past three, he arrives at a quiet pace on Saturday afternoon, October 14, at the Musselkanaal station: the DM ’90 diesel train, better known by its nickname “Buffalo”. The train was first used by the Dutch Railways in the mid-90s. However, due to electrification of the track, it was used less and less. Currently, the train set only commutes from Zwolle to Enschede and to Kampen, the so-called “Kamperlijntje”. But since this line has now been electrified, we will say goodbye to the “Buffalo” at the end of this year.

As a farewell ride, the train made an extra long ride on 14 October for train lovers from Zwolle to Stadskanaal and back. After first stopping at the STAR in Stadskanaal, the station of Musselkanaal also received a visit from the “Buffalo” at three o’clock on Saturday afternoon. And just like on a number of other platforms, train enthusiasts were able to take extensive photos of the train here.

It is not yet clear what will happen to the “Buffalo”, but it is clear that the end of this year will be over for the diesel train.

As did broadcaster RTV Noord:

More than two hundred train enthusiasts want to make the best shot, so there is a strong call to the people in the way.

Train hobbyists Mart van der Wijk and Enrico Schreurs have been following the train route all day by car to take pictures. For Schreurs, Stadskanaal was the best photo opportunity of the day. “The train sets have never been there before and it is a recognisable point for me,” says the train hobbyist.

Following the railway via the eye in the sky that is Google Maps, I found the bridge in question. 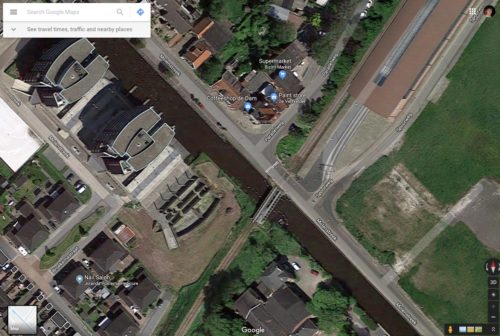 And Google Street View provided a better look at the canal that lead to the swing bridge being provided. From this angle the need for a swing bridge is obvious – with only a metre of clearance between the waterline and the rails, it would be impossible for a boat to pass under without it!

Turns out there are plenty of other manually operated swing bridges on the Stadskanaal–Zuidbroek railway – this is just one.

And the copyright infringement never ends

I’ve just come across the same video on Facebook a second time, but stolen by a different page – ‘OMG Videos’. Their useless caption:

This isn’t what i thought