Kiev or Kyiv – what to call the Ukrainian capital

During my 2012 trip to Europe the only reason I had for visiting Kiev was to visit Chernobyl, but I ended up loving the city so much I was sad to leave it so soon. But one thing I never realised was the politics behind the name of the city, and Ukraine itself. 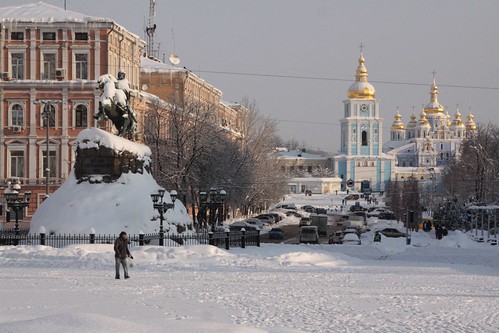 Is the city called Kiev or Kyiv? Adam Taylor explains in this piece at Business Insider:

You see, from almost the very moment we began writing about Ukraine and the EuroMaidan protests, Ukrainians have been politely e-mailing us, asking us to not write Kiev, but to write Kyiv instead. “Here we say ‘Kyiv’ not ‘Kiev,’” Taras Ilkiv, a Ukrainian journalist who recently wrote an article for Business Insider on the protests, explained in an email, “because ‘Kiev’ is the Russian word.” It’s simple: in Ukrainian, the word for the city is Київ, while in Russian, it reads as Киев.

Transliteration is always a bit of a strange thing, but it’s especially complicated in Ukraine, where roughly one sixth of the population is ethnic Russian, speaking Russian, and another sixth are ethnic Ukrainian, but speak Russian too. Given a history of Russian domination, both during the Soviet period and before, it’s understandable that language has become a big issue in the country.

Which leads to another contentious name – why Ukraine isn’t ‘The Ukraine’. Again Adam Taylor explains:

Chances are if you find yourself talking about the ongoing protests in Kyiv, you’ll slip up and refer to the country in which Kyiv is situated as “the Ukraine.”

It’s an understandable mistake, perhaps — until its independence in 1991, when Ukrainian leaders formally asked the world to drop the “the” and just refer to their country as “Ukraine,” “the Ukraine” was commonly used in English. And many people still default to it — but, to be blunt, it’s totally wrong.

But why did we come to refer to Ukraine as “the Ukraine” in the first place? While there are examples of country names that are preceded by “the,” this is usually only done when the country name refers to a group or a type of political organization — for example, the United States of America, the United Kingdom, the Netherlands.

Ukraine does not fit into this group.

It may seem like a minor detail, but many people are angered by the addition of “the” to Ukraine, arguing that it is being used to help sideline Ukrainian statehood.

You learn something every day – and I’ve got a lot of “the Ukraine” references to remove!