An electro-diesel locomotive is a unit that can operate from either an external electric power source, or standalone with an onboard diesel engine, and on the railways of the former USSR is an interesting example – the ОПЭ1 and subsequent developments. 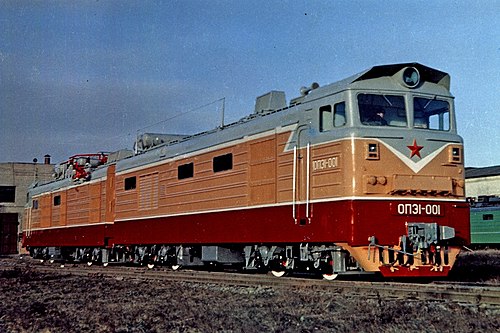 Developed in the 1960s to work on the open cut mine railways of the USSR, electrified with 10 kV AC 50 Hz overhead lines, a ОПЭ1 locomotive can be made up of a mix of four different kinds of unit:

Which can then be arranged in a variety of ways:

Following the collapse of the USSR production of the ОПЭ1 locomotive slowed, with a total of 417 electric/diesel locomotive combinations, 52 motor dump cars, and 32 traction power boosters manufactured by the time production ended in 2002.

The design was further refined as the ОПЭ1А introduced in the 1970s, which saw the locomotive body shrunk, improving the visibility for the train driver in the reverse direction.

photo by Серёга, via Wikimedia Commons

ОПЭ1 locomotive shunts a rake of side dump wagons.

A railroad slug is an accessory to a diesel-electric locomotive. It has trucks with traction motors but, unlike a B unit, it cannot generate power on its own since it lacks a prime mover. Instead, the slug is connected to a powered locomotive, called the mother, which provides the needed electrical power to operate the traction motors, and the motor controls.

Which look much the same as the USSR examples already seen.