The stations of the Moscow Metro are known for their ornate architecture, but Площадь Революции (Ploshchad Revolyutsii) station on the Arbatsko-Pokrovskaya Line has another form of artwork to offer. 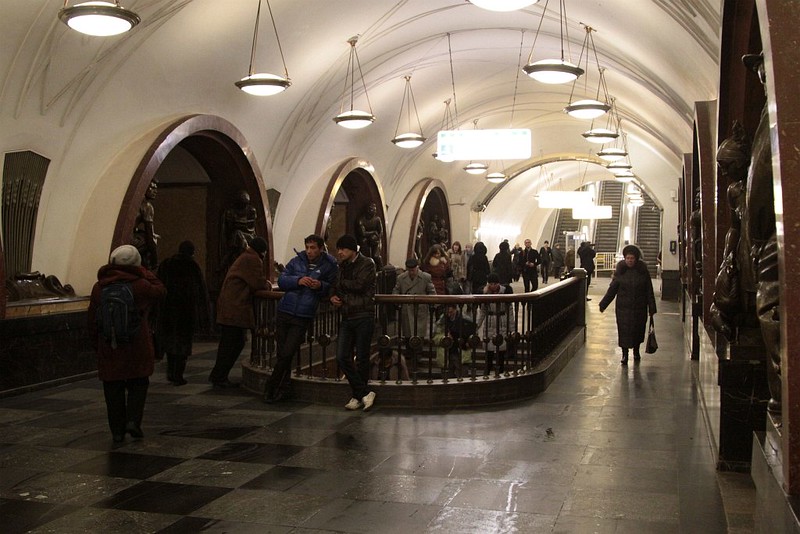 A series of bronze sculptures. 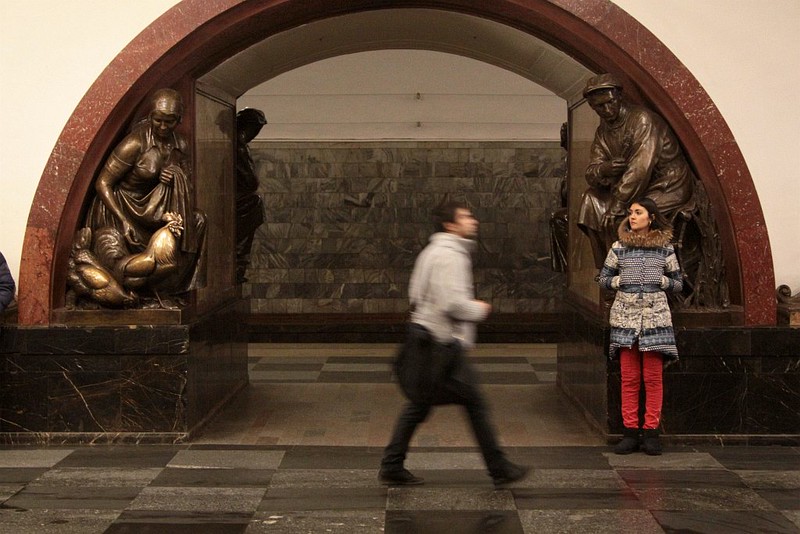 For some reason the dog sculpture is the most popular. 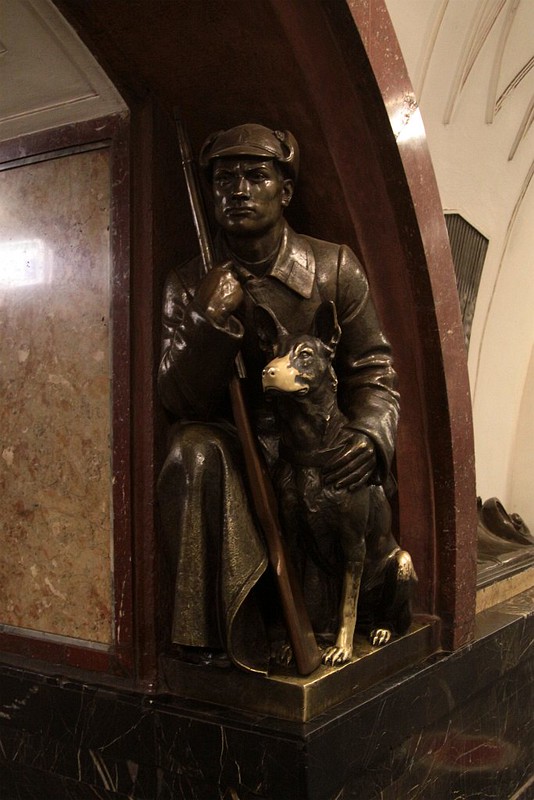 With every second person seeming to stop on the way past. 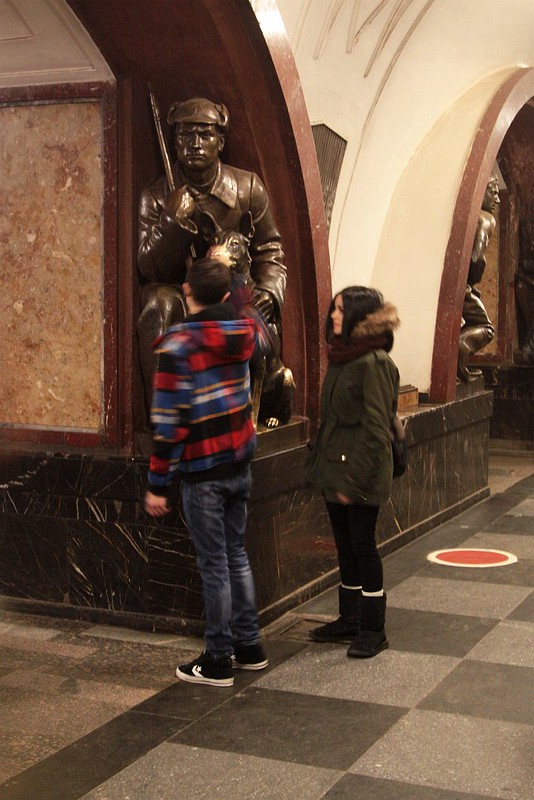 And give the dog a pat on the nose. 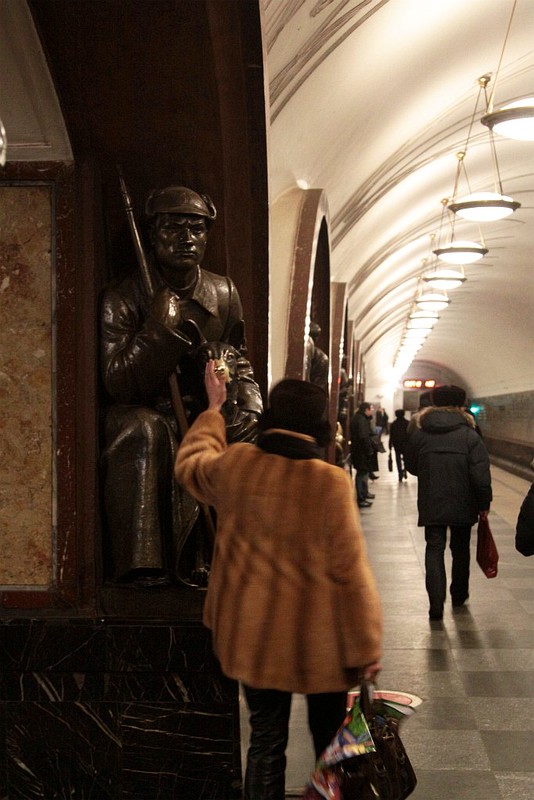 Presumably thinking it will bring them good luck. 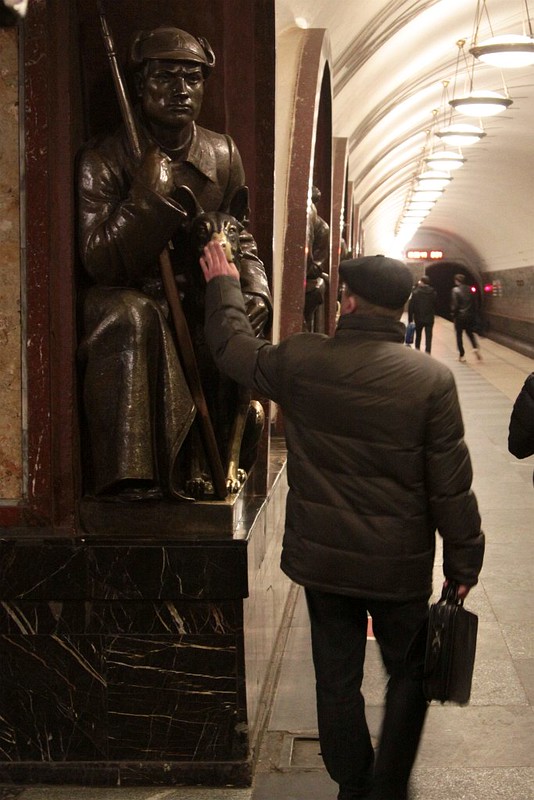 But a nearby rooster is also getting a similar amount of attention. 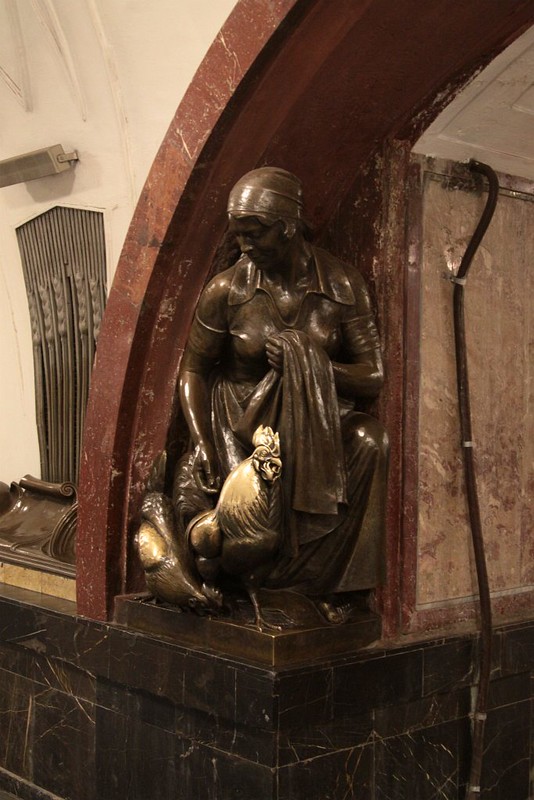 But why so much attention?

«Архнадзор» explains the history of the superstition.

The tradition to touch the statue of a bronze border dog at Ploshchad Revolutsii station arose long ago, but at first it was just a student problem. One can understand: the students in the majority of their people are dark and disorderly, they remember about the exam three days before its end, when all that remains is to hope for only a miracle. And who else can pray for the miracle of the Soviet Komsomol https://en.wikipedia.org/wiki/Komsomol – not the saints of the saints. So let the mystical patron of a lost Komsomol become a bronze animal, whose polished snout mysteriously flickers in the twilight of Moscow dungeons. In general, at first it was rather funny.

While also detailing the damage this ‘tradition’ has caused to the sculptures.

In the past ten years, the pilgrimage to the underground shrine suddenly became a nationwide action. Check for yourself: out of ten metro passengers passing along the platform, at least three will certainly attach to idols, and if someone does it in passing and in jest, then many are genuinely religiously zealous. At peak hours, the frequency of wiping each dog’s nose reaches 20-30 approaches per minute, and a queue forms.

Once the dog’s noses just glistened, and now they have completely lost the surface relief and are already beginning to lose shape. Pay attention to how finely and conscientiously the texture of these statues is worked out – the roughness of the soldiers’ overcoats, the furry dogs and everything else. The dog muzzles first lost their hair, then their noses – only holes remained, in a few more years they would not be there either. Roosters are rapidly losing feathers.

History of the sculptures

Russian language Wikipedia explains the history of the sculptures:

As Ploshchad Revolyutsii station there are 76 bronze figures depicting Soviet people, located on the pedestals in the corners of each archway. There are 20 different designs: 18 of them are repeated four times, and two – twice.

The sculptures were made at Монументскульптура (Monumentskulptura) in Leningrad under the guidance of prominent sculptor M. G. Manizer, with the team of sculptors including A.I. Denisov, A.A. Divin , A.A. Vetutnev, I. P. Ivanov, E. G. Falco, M. A. Vladimirskaya, V. A. Puzyrevsky.

And the scenes pictured:

The sculptures are arranged in chronological order from the events of October 1917 to December 1937:

All the figures (except the figures of the pioneers) in order to fit into the limited vaulted volume of the arched passages are depicted either on their knees, or bent, or sitting.