With a large fleet of nuclear power stations used for electricity generation across Russia, there is also an increasing quantity of отработанного ядерного топлива (spent nuclear fuel) needing to be safely transported to reprocessing or storage facilities, where the useful material can be reused and the remnant radioactivity can be safely managed for the thousands of years required for it to naturally decay. The chosen model of transport – train. 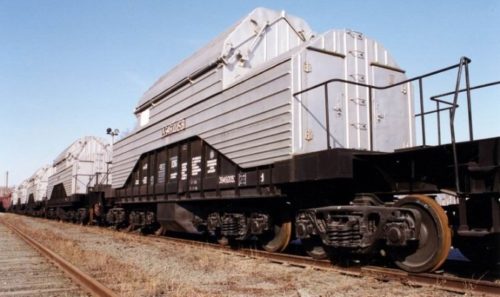 The irradiated fuel assemblies are loaded into transport casks inside the nuclear power station, which are then loaded inside specially constructed rail wagons. 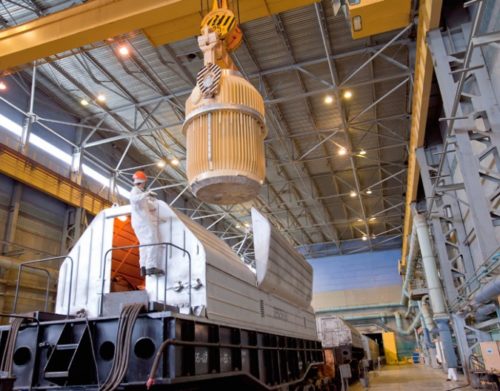 Heavier than a normal railway wagon thanks to the layers of steel shielding, multiple bogies are needed to spread the load.

Which can then be sent anywhere in Russia.

Fresh fuel assemblies are also transported to Russian nuclear power plants by rail – here is a (Russian language) documentary on the process.

The Bellona Foundation is an international environmental NGO based in Norway, and has written much about the history of Russia’s transport of spent nuclear fuel.

The US-based Cooperative Threat Reduction Program sponsored construction of six special TK-VG-18-2 type rail cars. The rail cars for spent nuclear fuel passed all the required tests and were certified for operation. Each car can take two 40-tonn containers with spent nuclear fuel. The new train will allow to speed-up the spent nuclear fuel transportation to the storage and reprocessing points. Until recent time Russia had two nuclear trains with four cars each. The Norwegian Government sponsored the second train’s construction.

In July 2006, activists from Greenpeace’s St. Petersburg office discovered several unguarded trains containing uranium hexafluoride at the station at Kapitolovo in the Leningrad Region, where Izotop is based. The train cars were parked directly next to passenger platforms. Moreover, Greenpeace measured the radiation dose on the platforms where passengers were standing at 800 microrontgens per hour, or more than 40 times the normal background radiation level.

“Nuclear and radiation safety is at a level such that transportation of nuclear materials presents no danger to the public,” Shishkin said. “A person would have to stand on the platform at Kapitolovo for 400 hours to receive the maximum yearly dose that would cause no harm to his health.”

“This sort of transportation could be a great present for terrorists, either as a source of nuclear materials, or as a direct target for an attack,” he said. “Such an attack could lead to very serious consequences, since it would not be too difficult to destroy the containers. And even without terrorists, an ‘everyday’ accident could produce an effect just the same.”

The protesters with Bellona and other Russian environmental groups were accosted by the guard bearing an AK-47, who cocked and pointed the weapon at the environmentalists who were filming the results of their radiation measurements – which exceeded background radiation levels by 30 times. The armed guard was travelling with the load as specified by law.

Bellona and Ecodefence have been following the load of uranium tails since it put into the port of St. Petersburg on Friday filled with waste from Germany’s Urenco enrichment facility in Gronau. Bellona and other Russian environmental groups demand the transport of the radioactive waste be ceased immediately.

Environmental protesters where hanging a banner emblazoned with the phrase “No to the import of nuclear waste” on the train platform in Avtovo, a thickly settled suburb of St. Petersburg where the train had come to a stop

A special-purpose train carrying 80 tons of spent nuclear fuel (SNF) from Leningrad Nuclear Power Plant (NPP) near Russia’s second largest city of St. Petersburg is soon to head out to a closed town in Siberia – a first shipment in an envisioned large-scale SNF relocation project that environmentalists fear will turn Siberia into a nuclear dumpsite and drastically increase overall safety risks, while helping none to address the exacerbating threat of nuclear waste accumulation.

Up to 22,500 tons of spent nuclear fuel generated in Russia’s altogether eleven RBMK-1000 reactors still in operation may be relocated from the country’s European regions to Zheleznogorsk, on the banks of the river Yenisei. Two hundred and ninety “nuclear trains” will be required to transport that much waste – assuming that all three Russian NPPs employing this type of reactors will continue to operate beyond their design-basis useful life terms.

During the 1990s a green four-car train would make the rounds every few months to Russia’s snowy Kola Peninsula to cart nuclear fuel and radioactive waste more than 3000 kilometers south from the Arctic to the Ural Mountains.

At the time, the lonely rail artery was the center of a logistical and financial bottleneck that made Northwest Russia, home of the once feared Soviet nuclear fleet, a toxic dumping ground shrouded in military secrecy.

Infrastructure, technology and the Kremlin were failing to keep up with the mushrooming catastrophe. The nuclear fuel train could only bear away 588 fuel assemblies at a time three or four times a year – little more than the contents of one nuclear submarine per trip. Even if the train ran on schedule, removing broken or deformed nuclear fuel elements at Andreyeva Bay was still seen as impossible.

Countries who operate nuclear reactors of Soviet design often export their spent nuclear fuel to Russia – Ukraine and Bulgaria have agreements in place; while including Finland, Hungary, Slovakia and the Czech Republic have done so in the past.

A Twitter bot tracks the progress of progress of spent nuclear fuel trains around the United Kingdom.