Trams are usually used to carry passengers, but across Europe there are a handful of tramway networks that also carry freight.

The best known in the English speaking world is the ‘CarGoTram‘ of Dresden, Germany. 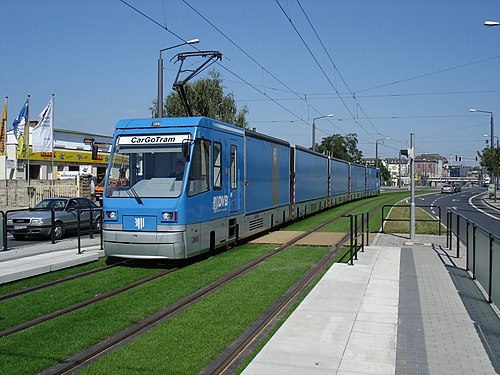 Photo by kaffeeeinstein, via Wikimedia Commons

The CarGoTram commenced operation in 2001, transporting car parts 4km to Volkswagen’s “Transparent Factory” located in central Dresden, from a road served logistics centre. Each bidirectional trams is made up of five units, with services operating along the same tracks used by passenger services.

Lesser known is the ‘Cargo-Tram‘ of Zurich, Switzerland. 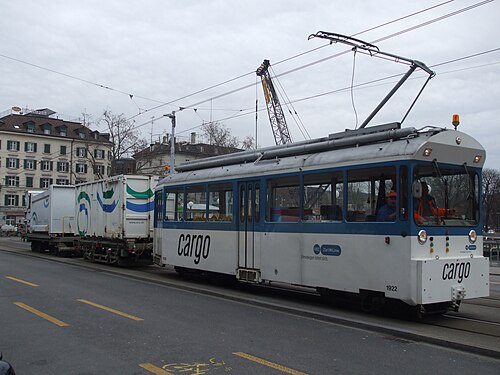 This service commenced operation in 2003, travelling around the city collecting rubbish and recyclables from pick up points along the way. A redired passenger trams operates the service, towing two flat wagons loaded with rubbish containers.

A different type of freight service was the ‘Güterbim‘ of Vienna, Austria.

A trial service commenced operation in 2005, transporting freight to Wiener Linien’s tram depots around Vienna, such as driver’s seats, wheelsets and brake blocks. A specially converted works trailer wagon was converted to carry the freight, towed behind a workshop tram. The trial ended in 2007, but I can’t find out what happened to it.

Converting trams to assist with track maintenance is common.

This unit is based out of the Leonova depot (№2) in Saint Petersburg, Russia.

This converted tram is from Nizhny Novgorod, Russia. 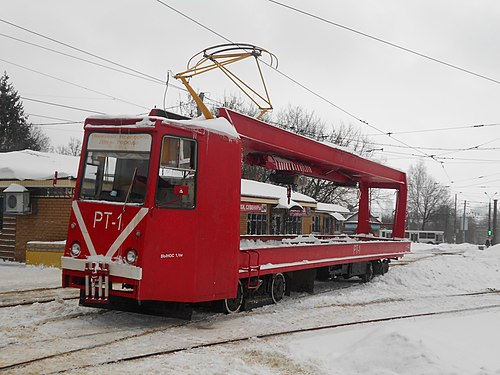 This cut down passenger tram is from Tula, Russia. 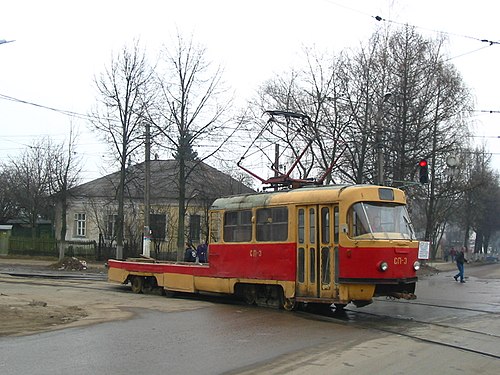 Blurring the line between trams and trains

But the strangest operation I found was in Kharkov, the second-largest city in Ukraine, where they once used miniature electric locomotives to move mainline freight wagons through the streets.

The “Харьков транспортный” website describes the history of this service:

For many years, electric locomotives were used to deliver rail cars with cargo intended for the Kharkov confectionery factory “Kharkovchanka”. The latter is located one kilometer from the tram-railway “gate” of the station “Kharkov-Passazhirsky”, opposite the former Cargo depot. Wagons were transported along Chebotarskaya Street, where electric locomotives and passenger trams for a long time worked side by side, practically not interfering with each other.

In the second half of the 1990s, due to the fact that such carriages heavily worn out the rails and created problems for the passenger movement, a certain period of time (from 12:00 to 13:00 on weekdays) was allocated, when the passenger cars were sent to a detour along Kotlov street and a pier on Krasnoarmeiskaya street, and electric locomotives could quickly and unhindered to proceed with cargo. After the transportation was over, the condition of the route was checked and the passenger trams again followed their route.

In July 2001, the tram branch along the Chebotarskaya street was closed to the passenger traffic, after which it was regularly used only to deliver wagons to the confectionery factory. In 2009, the factory abandoned the services of “Gorelectrotrans”. The remaining “no-business” electric locomotives were put off from operation and relocated to the territory of the Saltovskaya tram depot. A few years later these cars were decommissioned.

Similar operations also occurred in other cities across the former Soviet Union, with Трамвайно-железнодорожный гейт (tram-rail gate) being the unofficial Russian langauge term for the junction of the tram and rail networks. 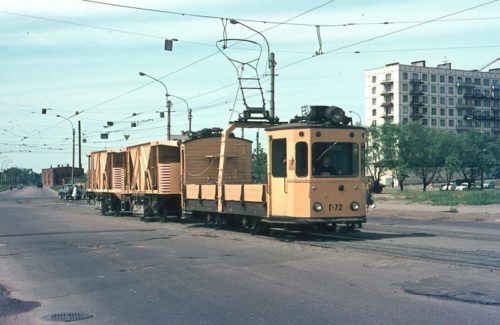 Petrograd was the first city in Russia where freight electric transport was established using trams, following the construction laid in the fall of 1914 to the Warsaw freight station. The second cargo branch in 1915 connected the warehouses in Badaevsky to Zabalkansky Prospekt. These early freight trams consisted of two platforms attached to a motorised tramcar that acted as a locomotive. Load capacity of each platform was 4 tons. By the end of 1921, the total length of the special cargo way had reached 13 km, and the number of 4-ton cargo platforms had increased by another 100. The average annual volume of traffic in 1918-1921. was about 250 thousand tons.

By 1940 the freight tram fleet consisted of 67 motor and 177 towed cargo platforms. The number of tram per route reached 43, each with a payload of at least 30 tons. In addition to 10-ton wagons, new 12 and 15 tons capacity wagons were entered service.

In 1950, tram trucking reached 1942.7 thousand tons, and in subsequent years remained at the same level. The cargo tram depot in 1956 daily issued on the line 47 trains, which served more than 20 enterprises and organisations of Leningrad. The amount of work done by the park for this year amounted to 40 thousand railway cars.

The maintenance of enterprises by freight trams was discontinued in 1997. The last serviced enterprise was Sevkabel , which has a base on the right bank of the Neva on the territory of the Neva freight station.

Moscow also had a freight tram system, but it was abandoned much earlier. 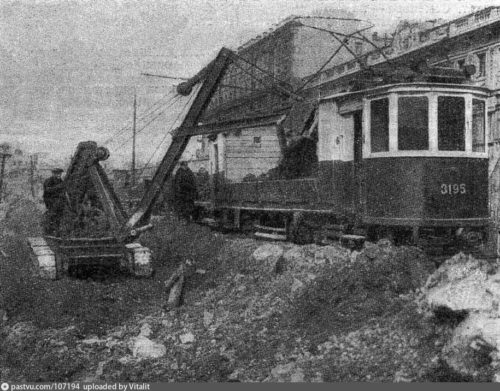 Cargo trams operated over the Moscow tram network from 1915 to 1972. The route was completed in May 1915 from the railway station of the Paveletsky railway station to the “Business Yard” beside Varvarsky Gate.

At the end of 1931 there were 139 freight cars in the Moscow tram. The cars were used for the largest construction projects: the Moscow Metro and the Palace of Soviets. Specially constructed trains-trailers with the carrying capacity of 50 tons were used for transportation of metal trusses for the construction of the Crimean Bridge, the Bolshoy Krasnokholmsky Bridge, and the Great Ustyinsky Bridge.

The heyday of the freight tram came during the Great Patriotic War , when practically all trucks were mobilized to the front, by 1942 the total length of purely freight branches was 38 km.

In 1972, the freight tram was officially discontinued – the last 7 cars, which were already used only for the needs of the tram network, were transferred from freight to service trams.

And a new proposal

Project partners recently met for an initial test at the streetcar depot in Siegfriedstraße in Lichtenberg before planning a more comprehensive field test. In the recent trial, a white cargo bike from Onomotion brought a delivery container. The container, 2 metres by 1.7 metres, was then easily rolled across a simulated tram platform and into the train using a ramp.

“The container was securely fastened with straps in the multi-purpose area, where strollers or wheelchairs usually stand,” BVG streetcar boss Rico Gast said. “Then the train made a few rounds in the depot.”

As well as Frankfurt, who preferred ‘pure’ cargo trams.

Frankfurt am Main has also tested putting cargo on a streetcar that runs from the outskirts of the city to the centre. Partners include the Frankfurt University of Applied Sciences and Porsche Consulting. But Frankfurt didn’t just load a delivery container into a train, they are looking at converting a Siemens/Duewag Type R streetcar into an exclusively cargo tram.

“Up to 23 containers could fit in it,” says Seelbach.

Although the all-cargo tram is preferred by experts, it’s not even on the table in Germany’s capital, with BVG preferring mixed-use trains. Containers would just be wheeled onto trains as part of their normal routes.

In April 2021 the Romanian city of Iași launched a recycling tram service in collaboration with recycling company Salubris, with a specially converted ex-Swiss Be4/4 tram travelling the city every weekend to collect e-waste.

The German term for ‘freight tram’ is Güterstraßenbahn – German-language Wikipedia has a summary of former operations in western Europe.

1 Response to Freight trams of Europe