Kiev’s metro tunnel that is actually a bridge

On the Kiev Metro there is a curious section of tunnel that doesn’t run underground – instead the concrete tube is carried over a deep railway cutting by a bridge, only to head straight back underground.

Image by AMY, via Wikimedia Commons

Called the Гаванський шляхопровід (Harbour Overpass) the bridge was completed in 1971 to carry the M1 Sviatoshynsko–Brovarska line of the Kiev Metro inside a concrete tunnel over the Kyiv-Volynsky – Pochayna mainline railway, with the four eastbound lanes of Проспект Перемоги (Prospect Peremohy) passing over the top.

But for passengers on the metro, the Harbour Overpass is a non-event – the concrete tube means trains pass between Nyvky (Нивки) and Beresteiska (Берестейська) stations in the dark, with nothing to suggest they have momentarily returned to ground level. 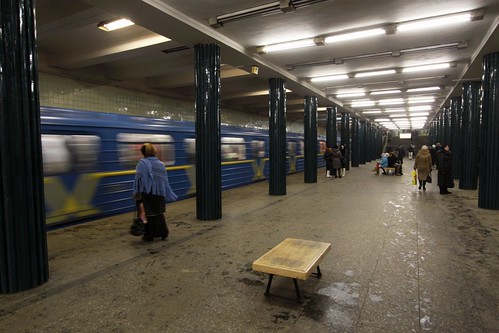