Ghost stations of the Kiev Metro

Hidden beneath the streets of Kiev, Ukraine is something unusual – a trio of unused metro stations that see train pass through, but never stop.

Львiвська Брама (Lvivska Brama) is the best known of the three ghost stations.

Work on the station began in the early-1990s as part of the northern extension of the M3 Syretsko–Pecherska line, but due to the lack of funds and indecision about the ground level entrance to the station at Lviv Square, work on the station stopped.

The metro line through the station opened in 1996, but the station lays empty today, the two platform tunnels and central hall of ‘three-vault deep pylon” design visible to passengers onboard passing trains. Access to the station is sometimes granted, with one notable use being a 2013 fashion show held by Ukrainian brand “Obrani”. 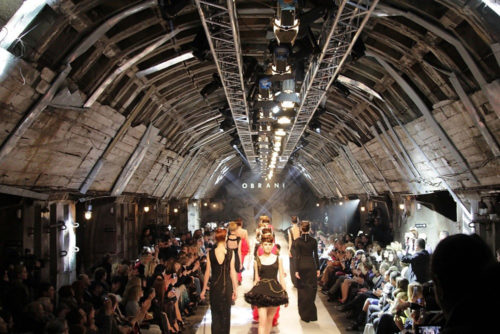 Various plans have been floated to complete the station, the most recent listing a 2018 completion date. This would require the construction of an escalator tunnel to the surface, station buildings at ground level, and fitout of the incomplete platforms.

Теличка (Telychka) is the second ghost station on the Kiev Metro.

Photo by AnkelKoss, via Wikimedia Commons

Work on the station began in the early-1990s as part of a southern extension of the M3 Syretsko–Pecherska line, but due to the industrial nature of the area the decision was made to only build the shell of a station. Of Колонная станция мелкого заложения (shallow column station) design, two flanking platforms were provided, easily visible to passengers of passing trains.

Various proposals have been made to turn the shell into a finished station, but all have been dependant on the redevelopment of the surrounding industrial area as a new residential precinct.

Герцена (Herzen) is the least developed of the Kiev Metro ghost stations. 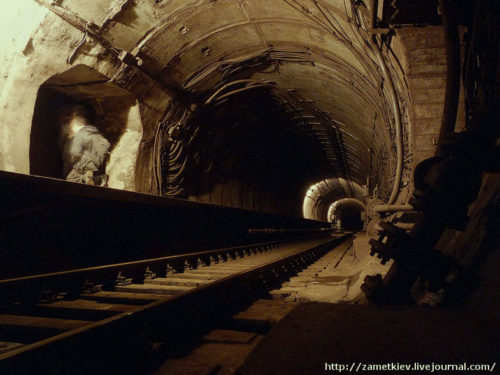 The construction of the station began in the mid-1990s as part of a northern extension of the M3 Syretsko–Pecherska line, under the working title of Заго́рівська (Zagorovskaya). The economic downturn lead to progress stalling, with the decision made to abandon the provision of a station at the site. Trains commenced passing through in 2000 with the extension to Дорогожичи (Dorohozhychi) station.

Today the only sign of the station is a ventilation shaft provided at the site, along with a traction power substation.

All are either Ukrainian or Russian language.