Setting sail on the Railklipper

What happens when you send a train out to sea? You get the Railklipper – a vessel built by Nederlandse Spoorwegen (Dutch Railways) in 2005 to celebrate the country’s maritime history.

Photo by Edwtie, via Wikimedia Commons

Dutch-language Wikipedia has the full story:

Railklipper was the first sailing train in Europe that was included on a rail timetable. The vessel made it’s debut on the Amstel River at the Carré Theatre on 3 August 2005 under the name ‘SailTrain’. With a ‘home port’ was Utrecht Centraal, the vessel made a number of test runs through the Netherlands, where Volendam, Haarlem, Rotterdam , Dordrecht and Utrecht were visited.

From 17 to 21 August, Railklipper took part in the ‘Sail Amsterdam’ event, providing a passenger service between Amsterdam Central Station and the temporary ‘station’ Amsterdam-Javakade in the Eastern Docklands where the event took place. From 2 to 4 September, the Rail Clipper was present at the ‘World Port Days’ event in Rotterdam. 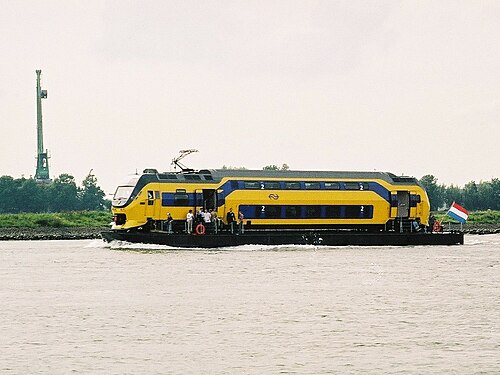 The train itself was a Nederlandse Spoorwegen ‘V-IRM’ (Verlengd InterRegio Materieel) carriage, specially modified for use on the water. Again, from Dutch-language Wikipedia.

The Railkipper consisted of a head coach of V-IRM train set 9518 that was placed on the former ferry “Burgemeester van Lier”.

The vessel was approximately 32 meters long and 6.5 meters wide, and had a draft of 1.1 meters, with a total weight was 180 tons, and a top speed of 6 knots. The head coach had 60 seats. The Rail Clipper was controlled from the extra cab that was attached to the rear of the train, and adapted with a maritime steering system. A pantograph was installed on the roof for decoration.

The train was developed by employees of NS, in collaboration with the Maritime Technology department of the Technical University of Delft, technicians from hoist and transport company Mammoet, stand builder Exhibits International , and MAPS Originals.

On September 13, 2005 the head carriage was removed from the ferry to be able to form another train set (8656) with other V-IRM coaches. The text ‘Rail clipper’ still appears to be on the carriage.

The extra head from which the Rail Clipper was operated for on the water has also been preserved and is stored in the former car workshop in Amersfoort . This is regularly exhibited at the NS on an open day under the motto of Milieubesparing bij de NS (‘Saving the environment at the NS’). This head has been completely dismantled from the inside of the entire control unit, but the extra windows that were needed due to the maritime traffic laws are still in place.

Photo by Maurits90, via Wikimedia Commons

Footnote: a TGV on the Seine

In 2007 SNCF loaded TGV train V150 onto a barge and sailed it down the Seine, to celebrate it becoming the new world railway speed record holder – 574.8 kilometres per hour.

And Eurostar on the Thames

In 2004 an Eurostar power car was taken down the Thames to mark the 10th anniversary of the London-Paris service.

A train on the Thames: Back in 2004, for eurostar's 10th anniversary, a TMST power car was put on a barge as a publicity stunt. You can't get much closer to the city centre than that! pic.twitter.com/aHy9EtRxlO