Across Europe a common theme at major railway stations is dead end platform tracks ending at buffer stops, with the main passenger concourse behind. But there was one thing I didn’t realise – sometimes the buffer stops are designed to give way if a train crashes through them. 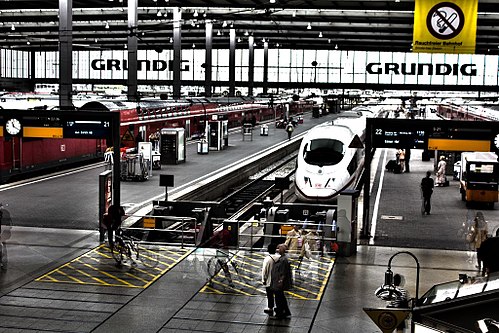 Photo by siegertmarc via Wikimedia Commons

This July 2009 incident at Munich Hauptbahnhof is one example, when an ICE train overran the platform track and crashed into the end of the platform.

Pushing the buffer stops into the middle of the station concourse.

As the federal police announced, the 51-year-old engine driver sprained his arm. The 220 travellers were initially unharmed. The accident occurred at 8.39 on track 15 of Munich Hauptbahnhof. “Of course, people are already frightened,” said police spokesman Berti Habelt. The train pushed the bumper about four meters into the ticket hall, with five floor slabs being moved along the platform. “It has rattled properly,” said Habelt. However, there could be no question of panic among the passengers, especially since the braking train was not very fast.

And noted that it was not the first such incident at the station.

The official response – some new signs, and yellow paint:

Since Wednesday, there is a yellow “No stay here!” sign on all railings at Munich’s main station at the end of the 16 platforms.

The Deutsche Bahn (DB) tightened the security arrangements – a reaction to the ICE accident on Friday a week ago. “We want to point out on the tracks in the main hall that people should move on quickly,” said Franz Lindemair, spokesman for DB Bayern. The space at the railings, which are immediately behind the buffer blocks, invites many train drivers to linger or even to sit down.

A dangerous undertaking, as it turned out on Friday eight days ago: There was an ICE from Lichtenfels could not slow down in time, crashed into the buffer and tore five floor plates from the anchorage. The 185 meter long train (5400 hp) came only four meters behind the actual breakpoint to a halt.

And that is precisely why the train is now reacting and intending to secure this area in the future. Lindemair does not even think about what could have happened if someone had been there. Then the accident would certainly not have gone so well. All 220 passengers remained unhurt, only a DB-Zugbegleiter sprained his wrist. According to DB, the cause is still unclear: technical or human error? The investigations of the Federal Police are still ongoing. The amount of damage is still open. But it should be in any case in the six-digit range.

Back to the station hall: The signs alone should not be enough. “We will also paint yellow hatchings on the floor tiles next week,” Lindemair announced. The safety zone will amount to five meters and the approximately 400,000 people at the main station will point this out every day: on the way to or from the train, this area will pass quickly. Or even better: it’s best to go straight for it!

An example of such signs is here.

As well as the painted lines.

The spare track with the folding part after the bumper is covered and pedestrian area. Some years ago (I think after a train hit the bumper) they marked half of it yellow (as you can see) and added a sign "No waiting in this area". pic.twitter.com/wj29tuQJxV