I’ve written about the three tiers of Russian rail service before – and today I am looking at the middle tier of suburban trains. Known as электри́чка (Elektrichka), they run along tracks shared with freight and long distance passenger services, and stop at all stations along the way. Reliant on government funding to run, recent funding cutbacks have seen the withdrawal of these services to many remote villages, stranding residents. 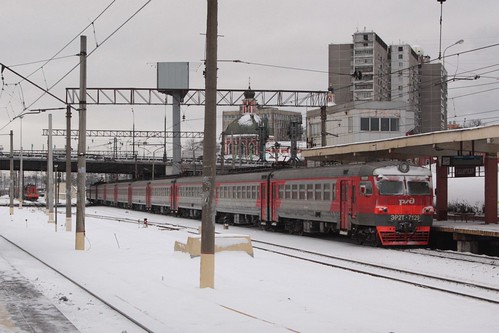 Elektrichka services have a long history in the former Soviet Union, running out of big cities such as Moscow to nearby commuter towns and neighbouring satellite cities, as well as linking other smaller destinations, on journeys up to a few hours in duration. 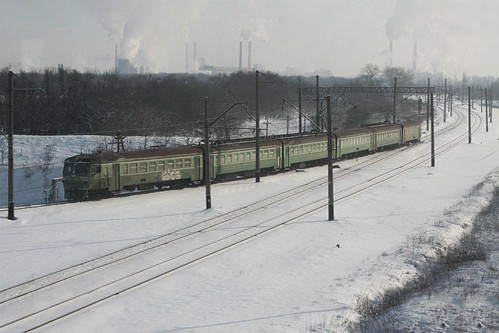 As well as stopping at major stations served by long distance trains, elektrichkas also stop at simple platforms in isolated areas known as “stopping places” (Russian: Остановочный пункт). Often shorter than the length of the train and located, these platforms often lack permanent staff or lighting. 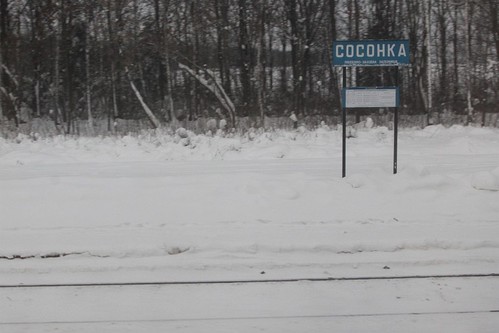 In 2016 Russia Beyond the Headlines, a part of the State owned newspaper Rossiyskaya Gazeta, published a piece on the funding crisis facing suburban services.

Russia’s vast distances put demands on transport links unknown in many other parts of the world, giving railways unprecedented importance.

But rail links are costly to build and maintain. In 2014, the federal government transferred the burden of subsidizing suburban trains to local authorities or cut services. Deprived of essential links, many local people took direct action, barricading lines to stop other services running and triggering nationwide headlines. In a remote Siberian village in the Lake Baikal region, Russia’s Trans-Siberian service came under threat as residents staged protests aimed at restoring local services. Many of these disputes were resolved, but the challenge to local rail services in Russia remains.

The current conflict over regional rail links, which have long been regarded as a transport network vital to national cohesion, is rooted in a complex system of financial and management relations.

Suburban trains, as well as all other passenger trains in Russia, belong to Russian Railways (RZD), which is one of the largest transport companies in the world and the biggest in Russia. RZD has the responsibility of operating suburban railway lines despite their unprofitability. The financial losses suffered by suburban electric services are the result of a federal policy that caps fares nationwide, keeping down prices for commuters across the country. Russian Railways has long been compensated from central government coffers for the losses that accrue.

In 2014, however, the federal government passed a law transferring the obligation to compensate Russian Railways to local governments, which effectively switched the financial burden from Moscow to the regions. From that moment on, thousands of people throughout Russia faced a threat to what for many was their only available means of transport. Lacking resources to subsidize the railway operator on the level set by Moscow, regional governments sought to cut costly routes.

“Since the beginning of this year [2014], 150 commuter train routes have been cut. Most often these places lack even country roads and whole villages cease to exist along with the electric trains,” wrote Novaya Gazeta correspondent Yelena Racheva in March 2014, after she had spent a week in Dolzhitsy, a remote village in the Pskov Region, which had been cut off from all the other settlements in the region.

The situation has only worsened since then. In 2015 Russian Railways planned to cut a further 300 commuter trains in a total of 39 regions, according to a report by RBK. Regional governments supported the decision, attempting to replace the trains with bus routes. The federal government intervened in 2015 and the closed routes were reopened. However, the future of suburban lines remains unclear.

This entry was posted in Trains and tagged Elektrichka, railways, Russia, Russian Railways. Bookmark the permalink.