Moving a nuclear reactor by rail

Plenty of freight is moved by rail, but something you don’t expect to see being moved by train is a nuclear reactor. But in 2016 it did – when the 330 tonne, 13-metre high and 4.5 meters diameter nuclear reactor vessel was transported from the Atommash plant in Volgodonsk, Russia to the under construction Belarusian nuclear power plant. 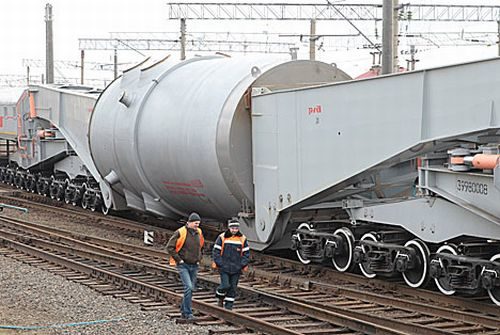 MINSK, 24 December (BelTA) – The reactor vessel for the first power-generating unit was delivered to the construction site of the Belarusian nuclear power plant on 24 December. Its installation will begin in 2016, BelTA has learned.

The reactor vessel was made by the Volgodonsk-based branch Atommash of the Russian company AEM Technologies. This piece of equipment weighs over 330 tonnes. It is 13 meters high, with the diameter as large as 4.5 meters. The reactor is a vertical cylinder with an elliptical bottom. The reactor core and the internal components will be located inside.

The manufacturer sent the product on its way on 14 October. Combined means of transportation were used to deliver the piece of equipment to the nuclear power plant. Heavy trucks transported it from the manufacturer to the Tsimlyansk water reservoir first. From there the vessel was shipped by river to Veliky Novgorod. A specialized transporter was then utilized to deliver the reactor vessel by rail to the construction site.

The manufacturing of the reactor vessel for the second power-generating unit continues. It is expected to arrive in Belarus in 2017. On the whole, AEM Technologies will make over 50 kinds of equipment for the Belarusian nuclear power plant. A total of over 4,000 tonnes of equipment will be made and shipped in 2013-2017.

The YouTube channel for Белорусская АЭС features a video of the reactor vessel being moved by rail:

While Mikhail Krivyy of Velikiy Novgorod captured the transfer of the reactor vessel from barge to road, and then to rail.

Mikhail Krivyy also has a photo essay covering the transfer on his website:

The main object of transportation was the VVER-1200 nuclear reactor, manufactured at the Atommash plant in Volgodonsk. Its weight is about 340 tons with a volume of 348 m³. The reactor body resembles a cylinder and has a displaced center of gravity.

Cargoes of this volume are almost impossible to transport on ordinary roads. A large weight and volume requires the reinforcement of the pavement along the entire route. Even subterranean engineering communications and power lines that are inconspicuous to a simple sight cause problems. And bridges and overpasses are often an insurmountable obstacle for such cargo.

It’s easier when transporting by rail. But even here it is necessary to prepare the infrastructure and adjust the train schedule. On the way, traffic lights, signs, contact network supports and other infrastructure elements can be temporarily dismantled. The schedule changes not only for passing trains, but also oncoming ones.

The easiest way is to transport such goods on water. Even on a small barge, the reactor core does not look bulky.

At the plant, the reactor core was loaded onto a Cometto self-propelled modular transporter. In turn, the conveyor along with the reactor were loaded onto a barge. From Veliky Novgorod to the construction site of the Belarusian NPP the reactor was transported along lightly trafficked single-track non-electrified lines.

The railway wagon used to move the reactor is known as Schnabel car – this particular example had 32 axles with a carrying capacity of 500 tonnes – type ТСЧ-500М, model 14-Т001.