‘You break it, you buy it’ at Russian restaurants

Restaurant menus around the world are usually pretty simple, but in Russia and other post-Soviet countries restaurants often include something extra – a section titled «бой посуды» (“battle dishes”). 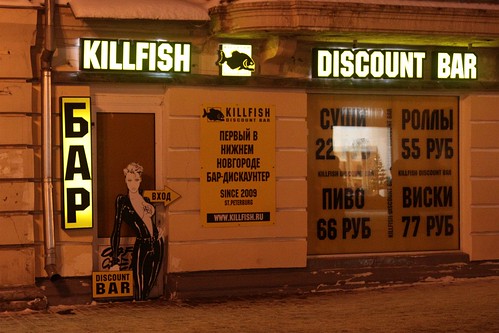 I first noticed it on the menu for a Russian chain called “Killfish Discount Bar”.

But I soon found more examples of “battle dishes” online – like this restaurant with a complete price listing of different pieces of crockery and glassware.

So the meaning of “battle dishes” is now clearer – it’s a ‘you break it, you buy it’ rule that restaurants in post-Soviet countries apply to customers who damage glassware or crockery.

Belarusian news agency Интерфакс-Запад has an article on the topic:

Restaurant “embarrassment”: who is responsible for the broken dishes and lost numbered?

The broken glass at a restaurant, or a lost ticket for a nightclub can cause numerous problems for the originator of “embarrassment.” We asked for advice from the chief legal adviser of the Center of legal services Alexey Nesterenko , which gave answers to vital questions.

When a visitor to blame?

If you broke an ashtray, a broken chair or table, floor or walls spoiled institutions, which have come to rest, then reimburse such damage to you will be required to complete the program. Especially if your wine is discreet in your actions. Moreover, it should be borne in mind that wine can be expressed in the form of intent, as well as in the form of negligence. And even if you are carried away in conversation and, waving his hands over the table, knocked over a glass on the floor, then the damage will be considered as caused by negligence. But it’s your fault, too. The arguments that you did it by accident, do not release you from the responsibility for the damage caused.

Who will prove the guilt?

How much you have to pay for the broken glass?

Another question that often arises in such cases, – the size of the material requirements, claimed as redress. In some schools, you can see the inscription that for broken dishes visitor pays double (triple) cost of broken dishes. According to Part. 1, Art. 933 of the Civil Code of Belarus the harm caused to the person or property of the citizen, as well as damage caused to the property of a legal entity shall be compensated in full by the person who caused the damage. This means that the damage to be compensated in the amount of actual damage caused, but no more.

What if I need the money for the broken plate?

In any case, if you have something broken, broken, or messed up and did not find a common language with the administration of places, remember that force you to force to pay the amount of compensation for harm anyone (including the police) can not otherwise by the court.

If you disagree with the requirements of the institution, then proceed as follows:

– Require the Book of comments and suggestions, leave it in the record of the incident;
– Demand from the administration of the institution making the act of property damage with an indication of its value, which is required to describe their vision of the incident, as well as the reasons and arguments of his innocence ;
– Enlist the support of at least two witnesses to the incident;
– Inform the institution that you are not going to compensate the damage voluntarily (or plan only if your guilt is proven in court).

And if the administration institution considers it necessary, it may apply to the court. Also, remember that you are not required to give any (except the police), and furthermore pledge his passport. If the staff places will let you leave it, the use of physical force immediately call up the police.

In the above situation, it is important to behave in a correct and very reserved to employees of institutions have failed to give your actions for bullying and that to civil law does not conflict joined the administrative or criminal law.

What threatens the deliberate fight for utensils?

If you are carousing in a restaurant, we decided to entertain his friends fireworks of broken glass, it should be remembered that according to the Code of the Republic of Belarus “On Administrative Offences” intentional destruction or damage to property caused damage in a small amount, is an administrative offense entailing a fine of from thirty to fifty base units.

If the loss of a significant size, then your actions fall under the article of the Criminal Code providing for a sentence of community service, or a fine, or correctional labor for up to two years, or arrest for up to three months, or restriction of freedom for up to two years . Moreover, depending on the circumstances, your actions can be classified as hooliganism, which also entails criminal liability.

I also found this piece on the “battle dishes” practice, written by a Ukrainian restaurant equipment company.

Fight dishes in the restaurant who beats who pays?

Fight dishes in catering establishments is inevitable, of course, if we do not take into account small snack or point of fast food, which is used exclusively cardboard or plastic, not porcelain or glass. Fight dishes – it’s always unplanned expenses and waste, because without tableware glass and the bar is not exactly do in a restaurant.

Fight ware entails a number of issues: the account settings, write-off, and, of course, damages. In each institution, these problems can be solved in different ways, some places completely repaid at a restaurant, at the same time “price list battlefield ware” may be included in the menu along with dishes, utensils or payment bat separately for a specified sum.

In some restaurants the battle of dishes restaurant paid independently by debiting. In such cases, the amount can in a certain amount of partially charged to the waiters or the amount depends on the “guilt” of staff.
If the restaurant introduced a fight payment dishes waiters, in such cases, usually the managers responsibility to keep track of how many counts each employee glasses and plates.

A number of restaurants operating a combined compensation mode utensils battle. If blame the waiter in the broken glasses or plates, it shall reimburse the amount if the guest is to blame for this fight, returns damage to a guest.

In each restaurant, as we have already pointed out, the waiter compensated battle dishes differently, it all depends on the restaurant or cafe policy. In one institution fixed amount that must be paid for the battle of dishes, regardless of the actual damage, the other waiters pay only brought damage to the restaurant, and the waiters do not have to in the third restaurant to return the money at all.

With respect to the price list on the battle of dishes in the restaurant’s menu is not always unambiguous for all guests. Visiting various forums on the Internet, you may encounter the opposite opinion. Some believe that the menu at the battle of dishes – a sign of status places, while others say – it’s a sign of bad taste restaurateur.

A most curious situation, and one that seems to be limited to post-Soviet countries.

This entry was posted in Everyday life and tagged Belarus, dining out, restaurants, Russia, Ukraine. Bookmark the permalink.