Mobile coffee trucks on the streets of Kiev

Before I visited Kiev I never thought that it would be a city that takes coffee seriously, but it appears that the local residents love to drink the stuff – coffee trucks fill the streets. 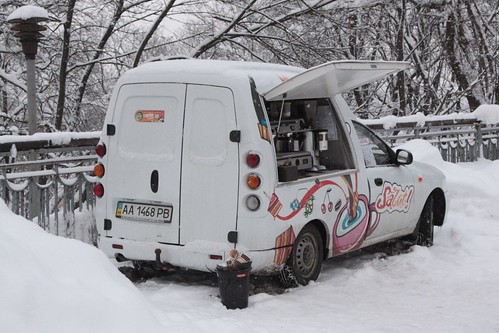 Outside metro stations, beside parks, and in residents streets – there was no end to where I found them! 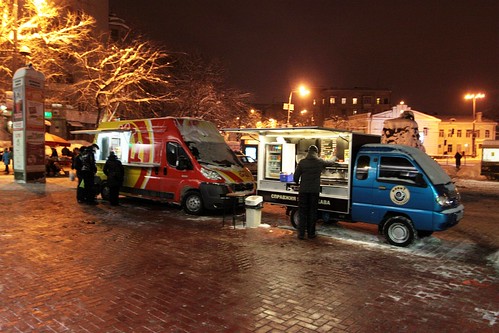 In 2012 Forbes listed coffee in their top five things to do in Ukraine.

You can get really good coffee in Ukraine, Turkish style, Americana, or whatever you prefer. These days you can see random coffee trucks in the streets selling real cappuccino and espresso drinks, in addition to regular coffee.

With coffee trucks also noted by the reporter from the Chicago Tribune who visited Kiev in 2015.

It is impossible to walk more than a block along any commercial street in Kiev without encountering at least two — but more often four or more coffee trucks or kiosks and cafes in a row.

On a street leading to St. Michael’s Cathedral in the administrative sector of the city, I counted 12 coffee trucks lined up in less than half a city block. I encountered three parked in front of a small playground; and four on a street flanking Kiev’s Golden Gate Museum, which was the western city gate when it was built in the 11th century.

But the granddaddy of them all was a double-decker coffee bus painted with cafe scenes that was parked just off Lavivska Square off busy Artema Street, a location that links business and residential districts.

But in December 2015 city hall cracked down on the vendors.

The Ukrainian capital is a coffee-lovers’ paradise, with the streets dotted with more than 1,500 trucks serving drinks to a city with a growing love of caffeine.

But officials in Kiev have recently tightened the regulations, increasing red tape and running costs for these roadside baristas in a move which could put many of them out of business.

Maxim Rozhin had been selling coffee for 18 months when officials turned up and seized the vehicle without any explanation.

“It was 4:00 pm. The truck was parked when about 10 people arrived. They surrounded it and took it away,” the 34-year-old told AFP.

Rozhin said he had submitted all the necessary documents to operate his coffee truck but said the authorities “were asking for more” — namely, a sticker ‘proving’ that he had gone through a newly-established auction procedure in order to be able to trade there.

In August , new regulations came into force requiring coffee truck owners to bid for the rights to sell at a certain spot, in a move the city hopes will help fill its coffers.

“If we want Kiev to be a European city, then there needs to be clear regulations,” Kiev Mayor Vitaly Klitschko said in a statement.

“Coffee trucks and kiosks cannot just set up wherever they want and not contribute to the budget.”

Until the new measures came in to place, traders paid nothing and only a small amount in tax, with city hall earning a modest 500,000 hryvnias ($22,000/20,000 euros) from the coffee business over the past three years.

Now it is expecting to bring in millions.

But the crackdown was short lived – the scene as of June 2016 was a stalemate between the two sides.

Now the pink snails and other coffee trucks — licensed and unlicensed — are returning to city sidewalks. So far local authorities have refrained from another crackdown, and some baristas have become more mobile, changing spots regularly.

According to this piece, coffee trucks first appeared on the streets of the Kiev in 2008. They sure spread fast!

This entry was posted in Everyday life and tagged coffee, Kiev, Ukraine. Bookmark the permalink.