A few times in Russia I spotted an odd sticker affixed to car windshields – an exclamation mark inside a yellow box. But what do they indicate? 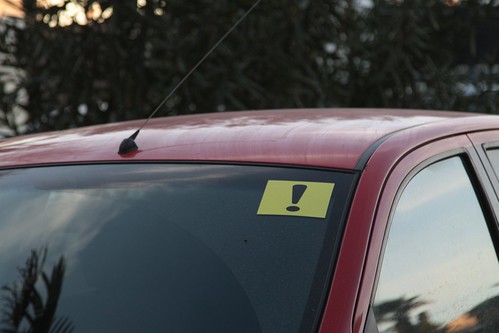 After a bit of digging I discovered that the stickers indicate a motorist with less than two years of driving experience.

The literal Russian translation is восклицательный знак в желтом квадрате, but some jokers have nicknamed them «Желтый квадрат Путина» (Putin’s yellow square) after Vladimir Putin, who drove the introduction of the stickers in 2009.

Online newspaper «Свободная пресса» (“Free Press”) has more on the stickers in this piece from February 2009:

All drivers, whose experience is less than two years will be required to attach to their cars a yellow square with an exclamation mark. Decision of Prime Minister Vladimir Putin is the innovation come into force from 1 March 2009.

Thus, the dream came true the traffic police, which has long insisted on the introduction of special signs for the “Dummies”. According to Deputy Head of the Department of Road Safety (DOBDD) Ministry of Internal Affairs Vladimir Kuzin, “the introduction of such a sign is necessary because both novice drivers and their surrounding motorists on the road will feel much calmer and more confident.”

New special signs “novice drivers” is a yellow square with a side of 15 cm. Inside the square shows the exclamation mark in black height 11 cm. It should be attached to the rear window of vehicles, run drivers, whose driving experience is less than two years. Under the new rule does not fall only tractors, self-propelled vehicles and motorcycles.

A possible punishment for refusing to use similar distinctive signs so far nothing concrete has been reported. Earlier, Deputy Head of the Department of Road Safety (Traffic Safety), Ministry of Internal Affairs of the Russian Federation Vladimir Kuzin already made ​​a statement from which it follows that certain repression still be. Even before the publication of the decree of the Prime Minister of the new special characters, gaishnaya Head Kuzin warned: “Without it, you do not pass the inspection, as well as without the” spikes “if studded tires installed on your vehicle.”

But not all traffic cops so categorical. For example, according to the chief of traffic police Pskov Sergei Litsovskogo no guarantees in this business formalism does not, because “you can get right, but in the car to drive all the time on the side (passenger seat), and the experience will be 5 years, and the skills of practical driving 3:00 , 10 hours of the day 2 ” . In other words, the driver, did not obtain the necessary experience, can easily withdraw from his car yellow sign, but it is safer on the road from it will not be in two years.

With that problem solved, I faced a new one – what does a triple exclamation mark sticker signify. 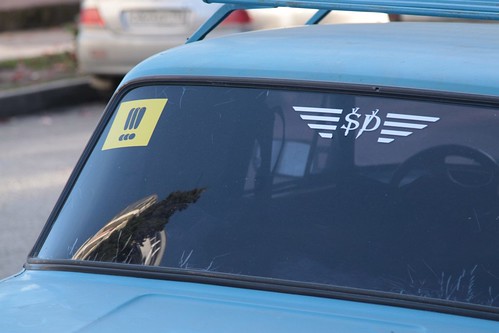 An even less experienced driver perhaps?

From David Burghardt’s blog at RIA Novosti – Rear-end someone else, I have a sign!

This entry was posted in Everyday life and tagged motoring, Russia. Bookmark the permalink.

2 Responses to Learner drivers in Russia