Russia’s fastest train is the Сапсан (Sapsan) which links Moscow to Saint Petersburg at speeds of up to 250 km/h (155 mph). It entered service in December 2009 on existing railway tracks, which raised safety concerns in the villages along the way. 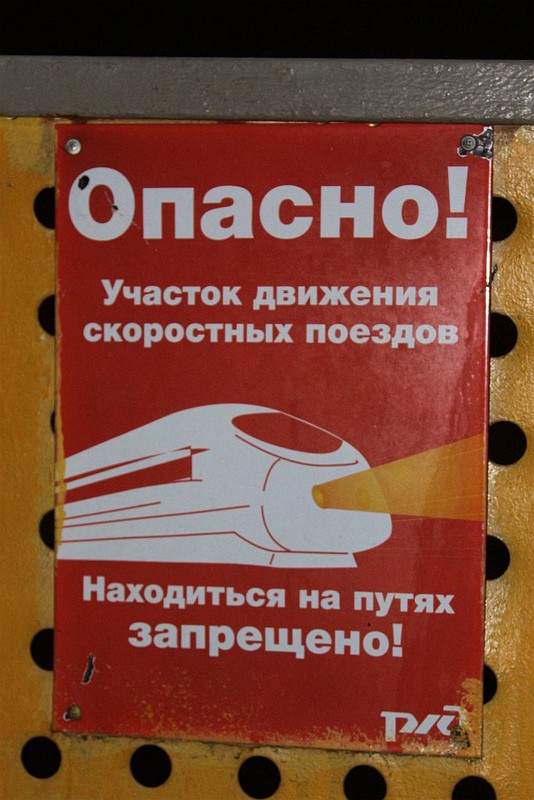 The train only makes limited stops along the way, running express through dozens of minor villages. 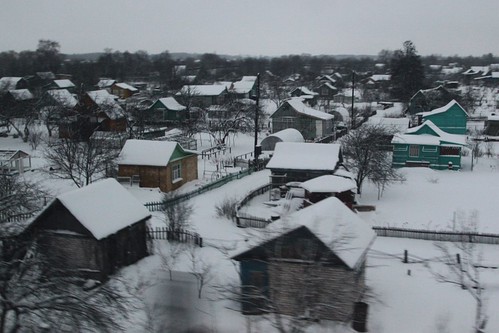 Hundreds of level crossings still exist on the tracks used by the Sapsan, resulting in railway staff having to guard the busier ones as the train passes by. 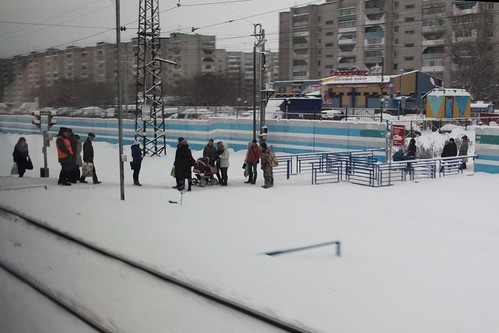 However at other pedestrian crossings, the only warning of approaching trains is a ‘don’t walk’ signal. 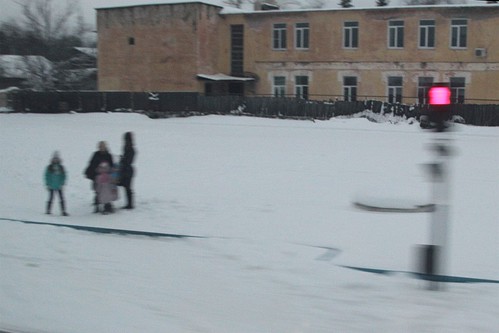 While on the outskirts of town, it is commonplace to create your own short cut by breaking down the fence. 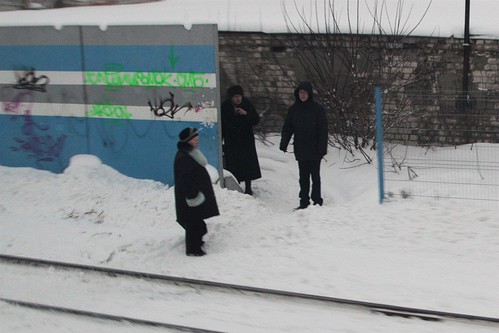 The end result is a wave of fatalities – as many as seven people in the first six months that the train was in service, earning it the nickname “White Death”, with Russian news agency RIA-Novosti had the following to say:

Russia’s luxurious high-speed passenger train running between Moscow and St. Petersburg has killed at least three people, however could be responsible for the deaths of seven, Russian daily Gazeta quoted a senior Interior Ministry official as saying.

“The deaths occurred when people were crossing rails outside authorized [pedestrian] crossings and failed to hear the silent Sapsan in time,” Gazeta quoted the head of the ministry’s department in charge of transportation safety, Alexander Brevnov as saying.

“The trains are very fast. A person crossing the track on a green light reaches the middle of the tracks when the light suddenly turns red because the high-speed Sapsan is approaching,” Russian weekly magazine Ogonyok on April 5 quoted a Russian retiree as saying. “Imagine a woman with a baby or a person with a heavy bag crossing the tracks…”

In addition, the deaths have sometimes gone unnoticed until the train arrives at the final destination.

High-speed Sapsan train, which travels between St. Petersburg and Moscow, hit a woman to death near Moscow, and then proceeded further as the driver had not noticed the accident. The tragedy occurred on Thursday morning, June 24.

The law enforcement agencies say that the woman “was crossing the rails in a non-designated area.” Currently investigators are working at the scene trying to establish the identity of the deceased, Interfax reports.

“The speed of the train at the moment of the accident was approximately 200 kilometers per hour. The woman was seriously injured,” a source in law enforcement agency told RIA Novosti, Moscow Region.

The police noted that law enforcement authorities learned about the incident only after the arrival of express train to Leningrad station, when they saw the damage to its front end. The impact wrecked the right side of the nose cone, leaving traces of blood.

However to protect the Sapsan train from cars and trucks stuck on the tracks, involved safety practices are involved.

Firstly, the same pop-up steel plates as seen elsewhere in Russia are put into the raised position, to catch any vehicles trying to bypass the boom gates. 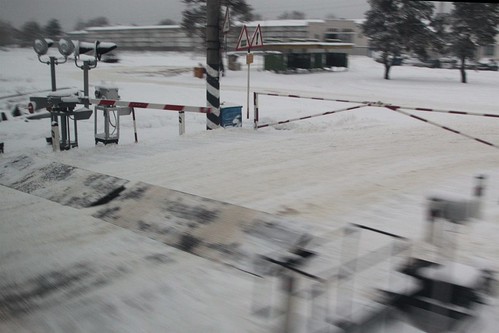 Secondly, the gatekeeper at each crossing locks an additional set of hand gates across the roadway 15 minutes before the train arrives, to be doubly sure that the level crossing is clear. 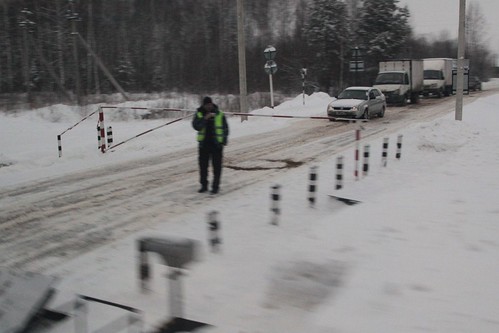 This leaves road traffic stopped for so long that drivers prefer to get out and wait in the cold, than to stay in their vehicles. 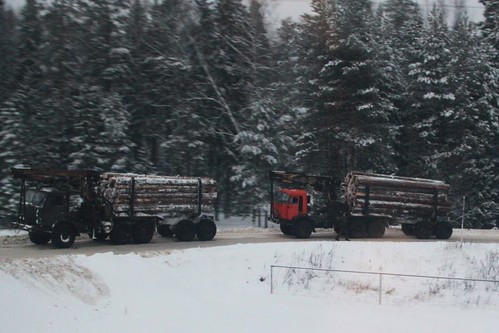 The end result is villages full of disgruntled locals.

“We are just like the enemy, everybody hates us. Some even start throwing fists,” Expert weekly quoted a railroad crossing gate operator at a railway crossing along Sapsan’s route, as saying. “And what we can do? Nothing! In accordance with instructions, the crossing gate should be closed three minutes before an ordinary train approaches, and fifteen minutes before Sapsan comes.”

As well as a spate of rock throwing targeted at the train.

Meanwhile, a few days ago high-speed train Sapsan running between Moscow and St. Petersburg was once again “attacked,” only this time the assailant was arrested. The violator was a teenager.

Since the launch of Sapsan in mid-December of 2009 it was attacked nearly 50 times, said Vladimir Yakunin, RR President. Unidentified individuals threw stones and other objects at the train, placed rocks on the tracks. However, in most cases violators could not be found.

According to Fontanka.ru referring to the press office of the Northwestern Department of Transport Internal Affairs, on June 22 near station Chudovo of Novgorod region the head of Sapsan train reported that a glass of the train car number 5 housing a bistro was damaged.

The escorting team questioned the passengers who said they noticed a teenager near the railway tracks who was throwing stones at the passing train. On the “hot pursuit” transport police arrested a 13-year-old violator at Chudovo station. He said to the police that “he was just walking near the station, and decided to throw a stone at the train for fun to see what happens.”

The law enforcers called the boy’s father who had to write an explanatory note. The police have drawn up a report on administrative violation under Art. 5.35 Code of Administrative Offences. The child and his parents were explained the dangers of such “mischief.”

Recently, the head of RR Mr. Yakunin threatened to “identify and catch the attackers” of Sapsan. He reported that 14 such criminal cases were initiated and in the production. Another nine cases were in the decision-making phase, while one person has already been convicted of vandalism.

Meanwhile, he said: “The media is replicating some nonsense alleging “guerrilla war”against Sapsan. It is very frustrating that members of the State Duma we have chosen also talk about it.” Yakunin formulated his attitude towards the issue in the form of a rhetorical question: “If people do not live well, why do they consider themselves entitled to throw stones at the tracks of the express train?”

Many have tried to explain the motivation behind the vandals – the New York Times tells of a Russia left behind.

A few times every day, the high-speed train between St. Petersburg and Moscow barrels through the threadbare town of Lyuban. When word gets out that the head of Russia’s state railway company — a close friend of President Vladimir V. Putin — is aboard, the station’s employees line up on the platform standing at attention, saluting Russia’s modernization for the seconds it takes the train to fly through. Whoosh.

However Pravda says there is a much simpler explanation.

Earlier, media outlets, including foreign ones, tried to figure out why Sapsan was being rejected by residents of Tver, Novgorod and Leningrad regions. They found out that “class struggle” of the poor against the rich had nothing to do with it.

People are not happy with two facts: the change in the usual schedule of electric trains that made many radically revise their daily route to work, and the fact that the railway authorities did not seem concerned about ensuring the safety of people living near the railway tracks.

Russian motorists have found one way to avoid level crossings closed for the Sapsan train – sharing the train timetable via Foursquare check-ins (examples one, two and three)

In 2011 German broadcaster Deutsche Welle produced an English-language piece on the Sapsan train and the impact on the villages that it speeds past.

And in 2014 S Klesova published a paper titled Traffic Safety at Railway Crossings of High Speed Sections of Railways.