In Germany trams are called ‘Straßenbahn‘ and the places they stop are called ‘Haltestelle‘ – which come in a number of different designs.

In the middle of cities, ‘Haltestelleninsel‘ are the most common type of tram stop. Located in the middle of the road, trams have their own dedicated tracks, with pedestrians accessing the tram platforms via traffic lights, or occasionally an underpass or footbridge. 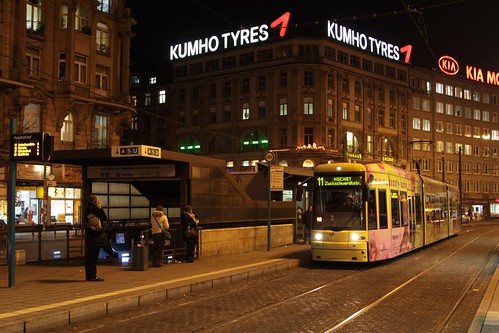 Another type is the ‘Kaphaltestellen‘ – these extend the footpath out to the tram tracks, giving a platform for passengers to wait on. Cars drive along the tram tracks, and have to wait behind stopped trams while they pick up passengers. 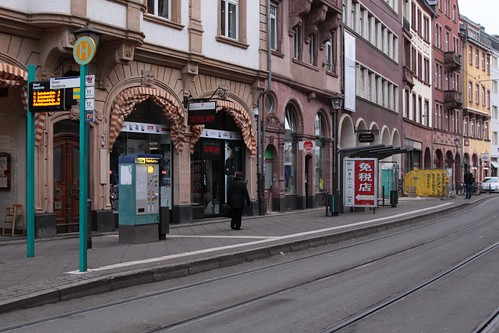 In the suburbs, a slightly different variant of the ‘Kaphaltestellen’ swings the tram tracks out of the middle of the road and towards the footpath, leaving the same amount of road space for cars and trucks. (photo by Gremosius on Flickr) 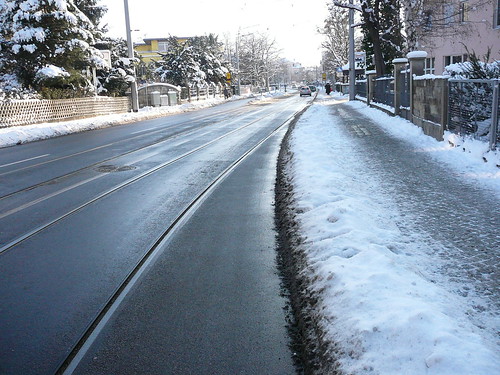 A third variant of the above is the ‘Überfahrbare Kaphaltestelle‘ (traversable Kaphaltestelle) which keeps the tram tracks in the middle and the footpath far away, but raises the roadway through the tram stop, giving passengers level access to stopped trams. (photo by user Andreas56 on Wikipedia) 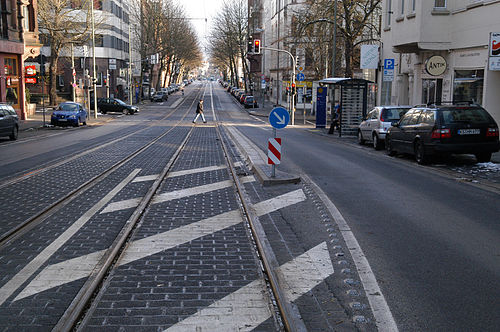 Forcing passengers leaving a tram to step out in front of cars can be a safety hazard on busy roads, so the ‘Zeitinsel‘ style tram stop was created. Roughly translating to ‘time island’, they are also called ‘dynamic stops’, and use traffic lights to prevent motorists from entering the area where passengers cross between footpath and tram.

An example of how they work can be seen in this cab video from the Austrian city of Innsbruck. (video by user strassenbahntk on YouTube)

A set of traffic lights are erected at the arrival end of the tram stop, capable of showing orange and red aspects to motorists, as well as a proceed aspect to trams. (photos by user Don-kun on Wikipedia)

As the tram approaches the stop, the traffic light cycles through orange and then to red, stopping cars from entering the area between the tram tracks and the tram shelter, while the tram aspect stays at proceed. 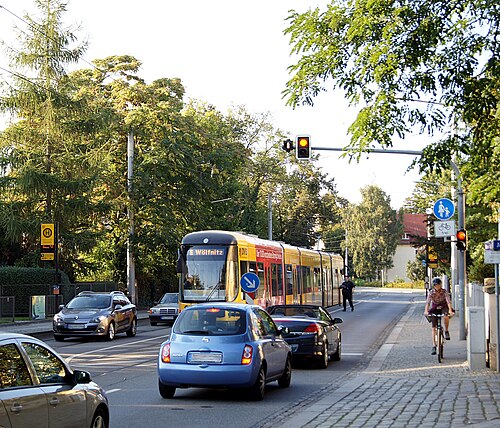 Once the tram has arrived, the traffic lights then extinguish the red light, permitting motorists proceed once the tram leaves the stop – as demonstrated in this video from the German city of Frankfurt am Main (video by user WorldOfTransit on YouTube)

Increasing safety for passengers is the main benefit of the ‘Zeitinsel’ stop – as detailed in this 2006 application to the Frankfurt city council. (via Google Translate)

The line 12 tram stop “Burgstraße” will be equipped with a traffic light system for a so-called ‘Zeitinsel’ to allow passengers there a safe entry and exit.

The tram tracks in Saalburgstrasse are located in the center of the road. Passengers at said stops have to cross the road to get on or off. It happens very often that cars driving by on the road right at the tram while the passenger change, some with very high speed. This leads to a very strong threat to passengers. It takes a here urgently called ‘Zeitinsel’, ie the stop area protected by a traffic light, which is activated only when crossing the tram and for a specific time to “stop” on.

This German language article ‘Kommunale Verkehrspolitik – Schülerinnen und Schüler mischen sich ein‘ (Municipal transport policy – students in the mix) tells the story of school students in Dusseldorf who through lobbying had the crowded platform stop outside their school converted into a ‘Zeitinsel’ stop.

3 Responses to Zeitinsel – a safer tram stop in Germany